Is it just me or is it near impossible to find fashion inspiration for members of the opposite sex? I recently revamped my boyfriend’s wardrobe to help him suit up for his summer internship and was frustrated by the lack of outfit inspiration out there for men. Why should we women have all the fun? If you’re sitting on a few links to men’s fashion blogs you frequent, I would love to hear from you! 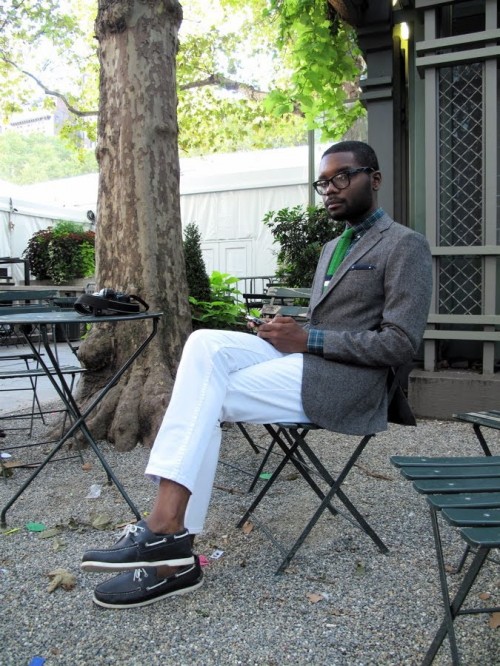 I love this European look (saved from Facehunter ages ago) but I’m not sure that my all-American and entirely heterosexual boyfriend would go for it. The boat shoes we bought him last month were a big hit but white jeans and hipster shades might be pushing it. 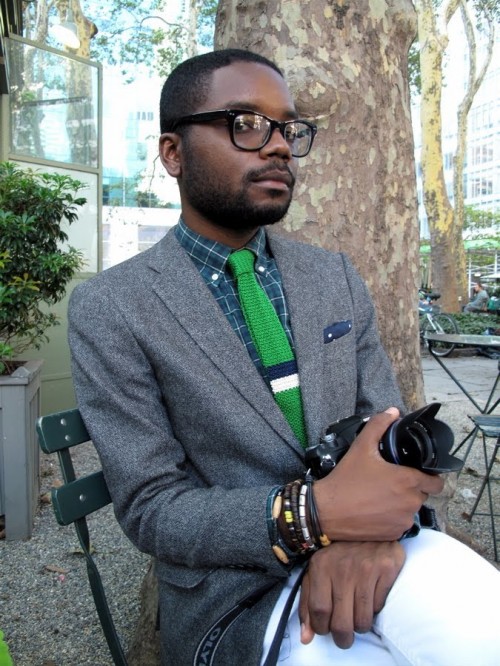 I don’t know that Michael, intelligent though he is, can be trusted to mix and match his own patterns, particularly a tweed jacket with a plaid shirt with a striped knit tie. Somehow this fellow makes it work, but that’s just the art of French dressing at work, isn’t it? (Isn’t the camera the perfect touch? What if I got my boyfriend into photography somehow? I suppose that would be venturing into gay best friend territory — though I’m on the market for one of those as well… Any takers?) 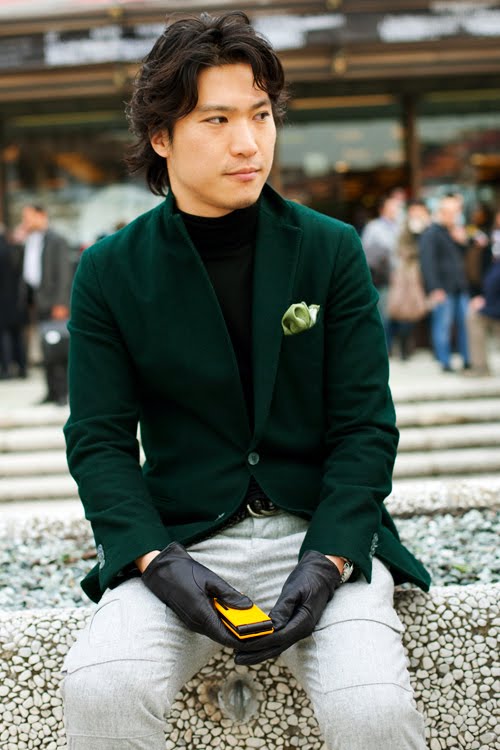 I don’t see Michael sporting leather driving gloves (or hair gel, thank God) anytime soon, so perhaps the lesson here is that I love the color green on men. A green jacket would flatter Michael’s blond locks and cool blue/yellow eyes, wouldn’t it? J.Crew, get on that! 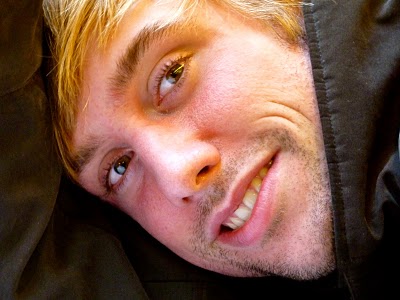 Anyway, I digress. The point of this post wasn’t originally the difficulty of finding straight men’s fashion inspiration but rather that the aforementioned boyfriend is also moving into off-campus housing at Bucknell next year and is somehow willing to trust me with the task of outfitting his new digs. The dilemma here is similar, however: how to give him a space that looks macho and entirely undecorated? (You know, the opposite of my style?) 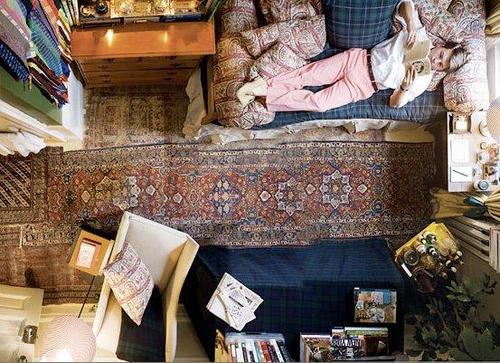 Long before this predicament ever presented itself, I stumbled upon this story on New York Magazine‘s website. Being the genius that I am, I read the article, marveled at the pictures, and promptly forgot about it entirely. Fast forward one year and I find myself frantically emailing Grace of Design*Sponge (who must now think I’m crazy) wondering if I had seen this space on their blog and if what I was describing from faint memory was ringing any bells with her. Of course it wasn’t and I abandoned it for a second time… Until I magically stumbled upon these photos on Little Blue Deer and professed my undying gratitude to Shari (who probably also thinks I’m a little off). Really this is an entirely roundabout way of informing you that I think I’ve finally found and saved the inspiration for my latest project. 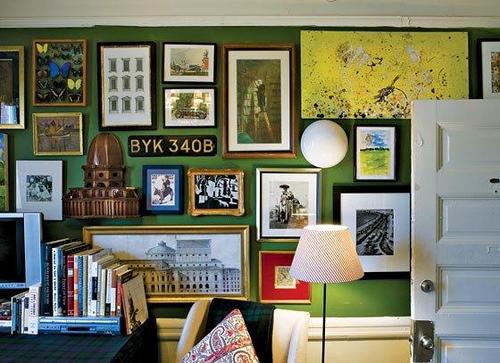 While bright paint and gallery walls probably aren’t the subject matter of Michael’s wildest dreams, I think it would be cool to go green and adorn the walls with vintage maps, photographs from our time abroad, and old sailing flags or sports pennants that I find online. Aren’t the different frames and mattes brilliant? 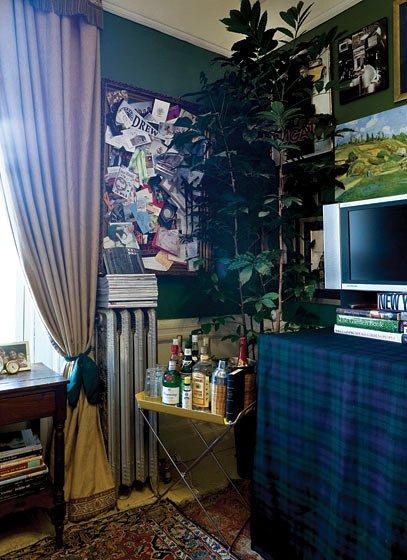 Ignoring the drapery ties and prospering plant, I think a well-stocked bar would make him the envy of his housemates (as opposed to the laughingstock). How convenient that I spotted Ralph Lauren‘s black watch plaid at HomeGoods (ahem, still waiting on that website) the other day! 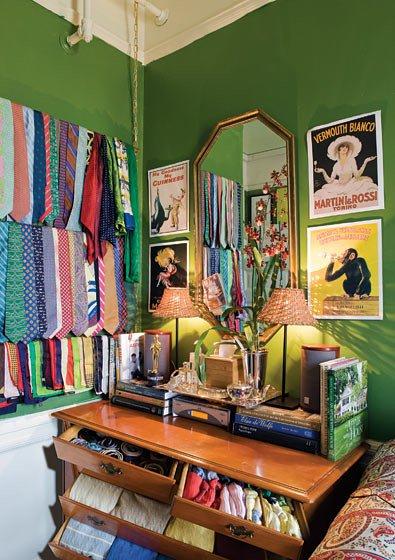 I can’t claim to have expanded Michael’s wardrobe to these depths (yet) but I love the colorful ties against the green backdrop and the $80 thrift store dresser underneath the gilded mirror. 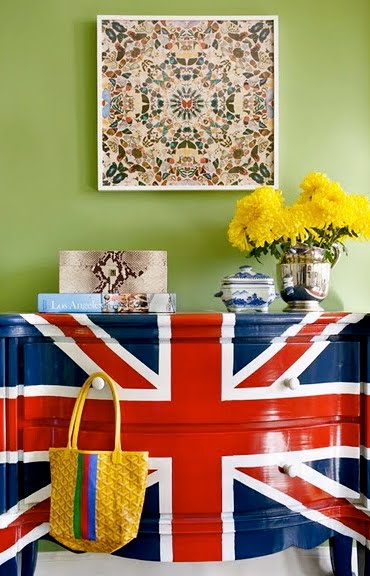 Besides the above inspiration, the only project I’m dying to try is this Union Jack dresser I spotted on From the Right Bank. How perfect since Michael just returned from five months in London!
What do you think of my ideas and inspiration for the boyfriend’s boudoir? Nothing could be less cool than a room that looks like his girlfriend swept in and made the place sparkle. I’ve been given free reign (and a helping hand!) so I’m trying not to mess this up! Where do you find interior inspiration that would appeal to your boyfriends/fiancés/husbands/landscapers/dogwalkers/etc.? I’ll take all the help I can get!

21 thoughts on “Designing for Dudes”

My mom and I have both been wearing these @houseof