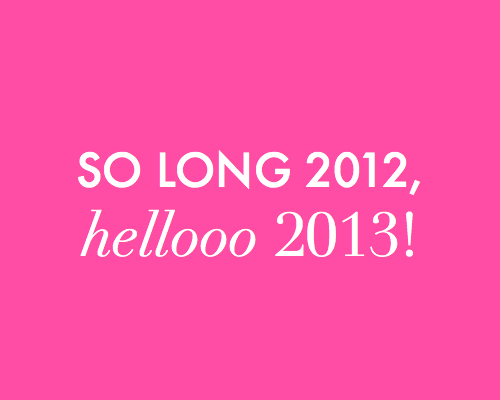 In January, I started writing for my favorite digital magazine, Matchbook. In February, I attended New York Fashion Week for the first time and made a little street style cameo on Unabashedly Prep. In March, I launched Design Darling {The Boutique} (definitely the highlight of my year!). In May, I cohosted a Jack Rogers party (hello, dream collaboration!). In August, I attended Alt Summit NYC. In September, I hosted Fashion’s Night Out at Alice & Trixie. In October, I found out I’d be speaking at Alt Summit Salt Lake City. In November, I hosted a holiday event with Elle Magazine at Kate Spade New York (pinch me please!). In December, I filmed a segment on holiday gifting for NBC Connecticut. And last week I stumbled upon the teeny tiniest NYC studio and yesterday — eeek! — signed a one-year lease.
All the while, I made steady progress on my 101 in 1001 list: buying my first grown-up bag, buying my parents an Apple computer, working out with a personal trainer, seeing a new Cirque du Soleil performance, trying acupuncture, taking a cooking lesson, seeing a comedy show, going to the top of the Empire State Building, going zip lining, upgrading to a DSLR camera, taking a self-defense class, and even participating in a flash mob.
Thank you to everyone who has been part of this amazing year. I truly cannot wait to see what 2013 has in store!
xx
Mackenzie