Will and I had the best time in Saint Martin. It was exactly the right amount of time to be out of the city and left us feeling totally refreshed and ready to take on the new year. It was also the perfect combination of being active, eating well, sleeping in, and time to do nothing but read and sip a margarita on the beach. That said, there were a couple things we’d do differently on our next trip that I thought might be helpful to share! 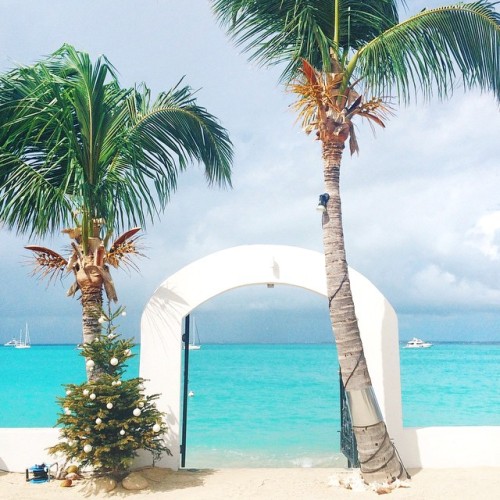 We stayed at Le Shambala, not because I had heard anything about it but because it was literally one of the only places in the Caribbean that had availability that wasn’t exorbitantly expensive… And now I realize that was probably a red flag, ha. Le Shambala is really a great restaurant that seems like they had a few extra rooms and decided to convert into a hotel. There’s no check-in desk (you walk into the restaurant), no one to ask for help with activity booking or direction mapping (which was half our fault for not making concrete plans ahead of time), and approximately 90 seconds of hot water per day. Oh and the view was extraordinary but definitely more waterfront than beachfront, as in you’d have to drive to an actual beach to plop down on a beach towel and open a book because that archway above led straight into the water. In short, I’d definitely book a different hotel the next time around. I recognize some of this was poor diligence on my part and I hate to leave a negative review but, more than that, I’d hate for any of you to book a trip to somewhere I recommended and not enjoy every second! Anyway the neighborhood, Grand Case, was filled with amazing restaurants and we resolved early on to spend very little time at the hotel. If we went again, I’d probably look for a place in Marigot Bay, a nearby neighborhood also on the French side of the island where we boarded the boat to Anguilla. More on that in a second! 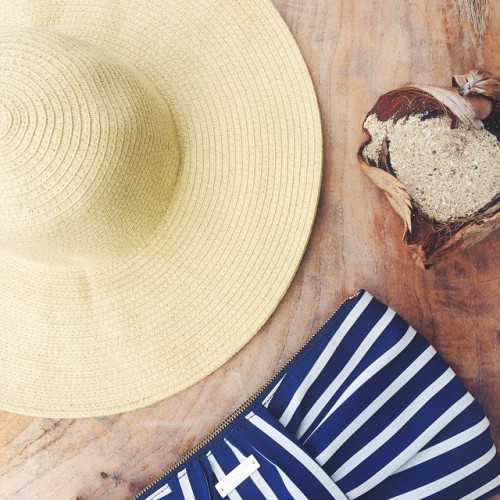 On our first day, we ventured out to Loterie Farm, a 135 acre nature preserve where you can zip line and eat up high in the rainforest. Walking the grounds was so peaceful and it was the perfect place to kick off four days of unwinding. Also, best.lemonade.of.my.life. I’ve literally dreamt about it since.

That night we decided that we needed to rent a car. One of you actually suggested this when I asked for recommendations and it’s definitely the way to go. Case in point: we spent almost $100 on taxis the first night/full day and then rented a car for $29/day. Lesson learned! Once we had a car, it was way easier to zip around the island and not get hung up waiting on a taxi at each location. We capped off day one with a glass of rosé on Orient Bay and decided we needed to go back the next day for a little adventure… 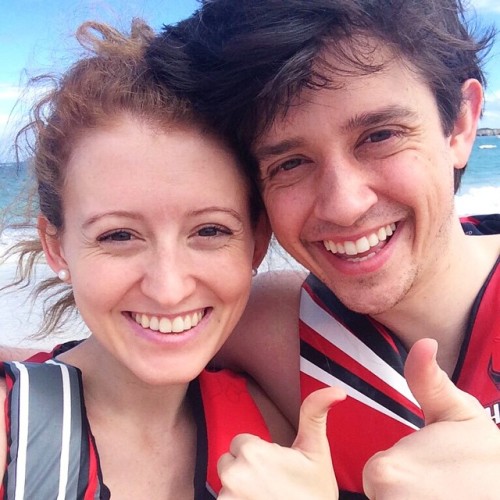 …parasailing! I had been a couple of times before but it was Will’s first go and we had so much fun. There were little booths all over the beach offering all kinds of water activities so you definitely don’t need to book ahead of time. We went up 600 feet which seemed crazy high and gave us an incredible view of the island. If you’re not afraid of heights, parasailing is actually really relaxing — a fun adventure without the adrenaline rush of bungee jumping, hang gliding, and sky diving. (Trying to talk Will into one of those next…) 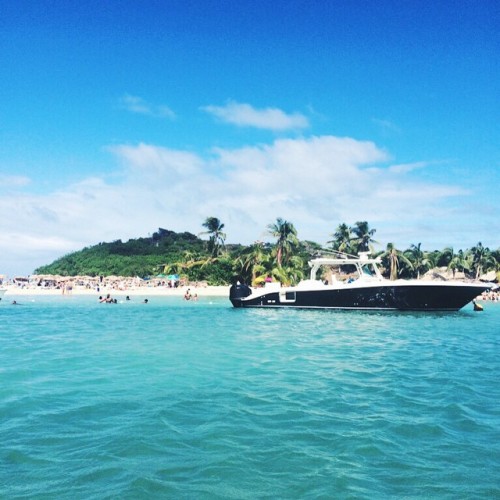 That afternoon was probably my favorite part of the trip. A bunch of readers said we had to make the trip out to Pinel Island and I am so glad we did. What a hidden gem! We showed up at the dock just in time for a small boat to shuttle us over to the island — I think the trip took less than ten minutes and yet it felt like a totally different place. Gone were the legions of tourists and tacky souvenir shops — just pure paradise. 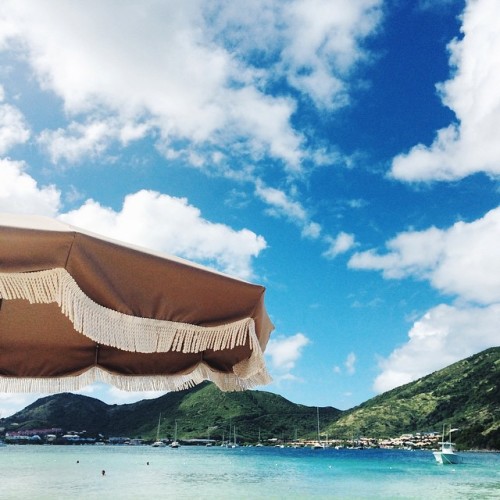 We rented two chairs and an umbrella and ordered lunch at Karibuni, which I could not recommend more highly. The service was some of the best we had on the trip and I had hands down the most delicious margarita of my life. And the water was crystal clear, bright turquoise. Seriously, do not miss.

Have I convinced you yet? Heaven on earth. 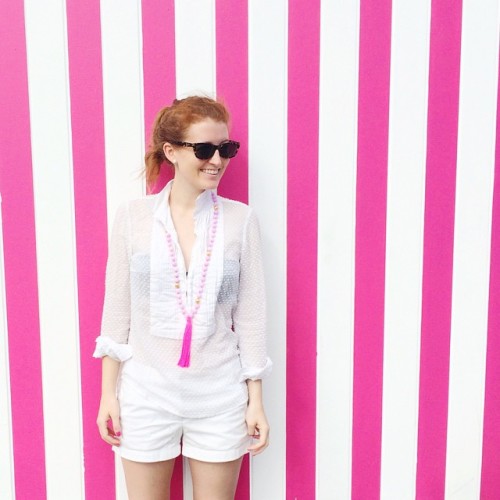 A few people commented on Instagram suggesting we take a day trip to Anguilla. Who could say no to an extra stamp in their passport? Another quick boat trip and we were on our way to Saint Martin’s English-speaking neighbor and home to one of the ten most beautiful beaches in the world. (Wearing a J.Crew top from last summer, Sea Elise necklace, and J.Crew chino shorts.) 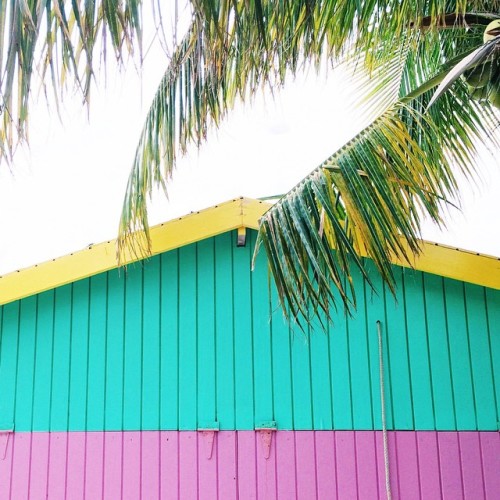 We took the boat from Marigot Bay in Saint Martin to Blowing Point in Anguilla and then a taxi to Shoal Bay (they drive on the other side of the street here!). It literally took my breath away: bright beach huts, the whitest sand, and the most striking blue water. It was also much less crowded than the beaches on Saint Martin, which was the perfect excuse to fly through Amy Poehler’s first book (highly recommend!) after a bite to eat.

Definitely could have spent more than an afternoon here!

After I finished my book, we reminisced on our favorite parts of 2014 and shared some of our goals for 2015. I have a feeling it’s going to be a really great year. How could it not be when it started with a view like this one?! 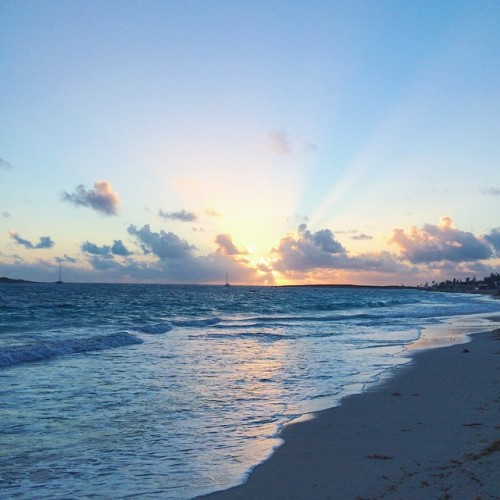 On the last day, we woke up at the ungodly hour of 6 a.m. (so not a morning person) to see the sunrise (which was #101 on my 101 in 1001 list!). It was awesome to have the beach to ourselves and feel like we were getting a head start on the rest of the island. Also, those colors — the photo really doesn’t do them justice! I tried to take a Hyperlapse but let’s just say I should probably stick to photos.

Thanks for making it to the bottom of this post… I know it was a lengthy one! I hope you’ll keep it mind if you happen to be planning a Caribbean vacay sometime in the coming year. I already have my parents convinced that we should do Christmas abroad in 2015! Who else took a trip over the holidays? Would love to hear!