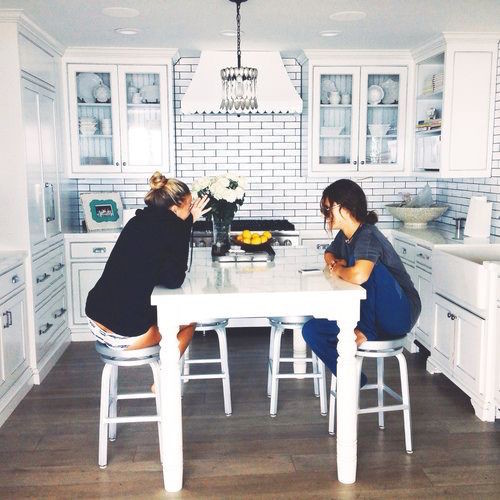 When I first announced that we were moving to Dallas, someone offered this advice for meeting people in our new city: say yes to ev-er-y-thing. Every invitation to coffee, happy hours, double dates, house parties… Say yes to every single one, no matter how rainy it is outside, how tired or lazy or antisocial you’re feeling, or how much you’d really rather curl up in pajamas with Netflix and popcorn. It’s easy to get so overwhelmed by a new place that you’d rather opt out than begin the daunting process of starting over and making new friends. But I can say hands down this saying yes strategy is the best thing I’ve done for myself since we got to Dallas.

Saying yes to everything is a mindset I first adapted several years ago when I lived in San Francisco for a few months after college. I didn’t know anyone on the west coast and would cold email other bloggers every week asking if they wanted to grab coffee or cocktails just as a way to meet people and see new parts of the city. Thankfully, my blogging network has grown quite a bit since then and I continue to meet a ton of people that way. But I also moved to Dallas with someone who grew up here and already knows a bunch of people and our New York friends have graciously put us in touch with friends of theirs who live here — all of which have helped making new friends a lot easier and more fun.

After a New York winter where I practically hibernated six nights a week, I’ve been a social butterfly at least three or four nights a week since we got to Dallas. I might even say I’ve been too social, except that saying yes (even when I sometimes feel like saying no) has been so much better than sitting home alone wondering when Dallas would start to feel like home. Instead of waiting for life to happen to me, I’ve been actively pursuing new friendships, trying restaurants in new neighborhoods, and just saying yes to every email or text that comes my way. Just like going on actual dates in New York, I know realistically each “friend date” in Dallas isn’t going to turn into a lasting friendship — but you miss 100% of the shots you don’t take! More than a dozen “girl dates” later, I’m slowly but surely finding good girlfriends and really glad I made that such a big focus right from the start. (Now if I could just find the same motivation to work out…)

If you’re trying to make friends in a new city (or you could just use a few new pals in a place you’ve lived for a while), saying yes and being proactive is the only way to make it happen. Coordinate a happy hour with your coworkers, ask friends if they’ll introduce you to friends of theirs, and say yes when your family friend offers to put you in touch with her daughter’s boyfriend’s cousin’s dog walker’s childhood BFF. At the very least (again, not unlike dating), you’ll get a good story out of it. At the most, you might make a new bestie or three. I promise the Netflix documentaries will still be there when you get back.

41 thoughts on “HOW I MADE FRIENDS IN A NEW CITY”