It’s been two and a half weeks since our move from Dallas to Greenwich and it feels like we’ll need at least that long to unpack the rest of these boxes! I’m definitely missing the feeling of being totally settled in our last house but it’s been fun to reconnect with old friends in the area and keep chipping away at arranging all our furniture and figuring out what goes where. And since several of you asked to see before pictures of our new house and it will be a while before this place is ready to be photographed, I thought I’d share the photos I took on my phone when we first saw the house in November as well as our game plan for each room. Enjoy! 🙂 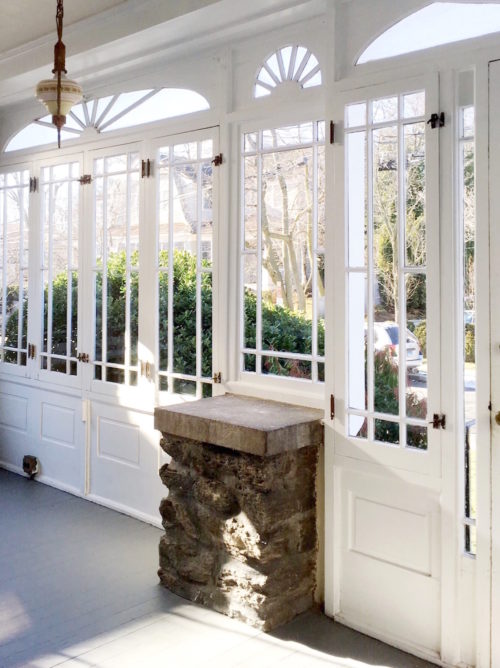 The sunroom is right through the front door and it’s by far my favorite room in the house. It’s a little chilly to be out there right now but I know we’ll be so happy to have it the rest of the year, not to mention as a space for entertaining. The light in there is incredible and I can already tell it’s going to be Rory’s favorite room too. Right now it’s full of boxes and probably the furthest from being decorated… I haven’t decided if we’ll do outdoor furniture out there or order a high table (something like this?) so we can use the counter stools we had in our kitchen in Dallas (I’d hate to store them in the basement and there’s no place for them in the kitchen here!). 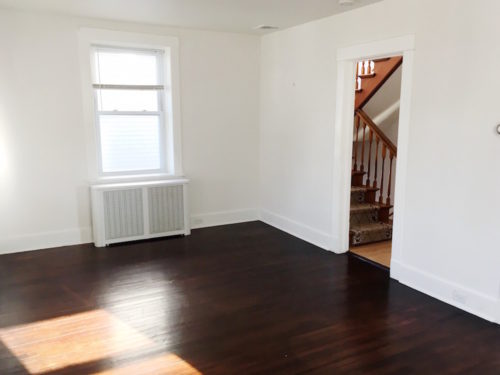 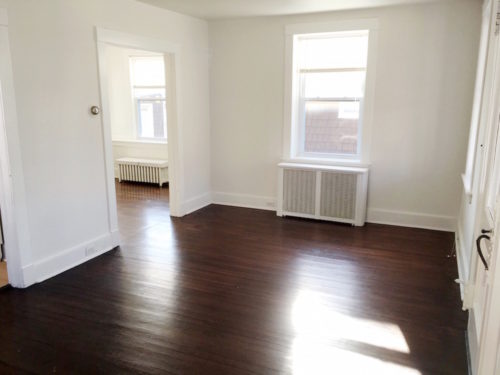 Through the sunroom is the living room which also gets great light! This is one of the biggest differences from our house in Dallas is that it’s basically impossible to take a photo that’s too dark in this house. There are windows on three of the four walls and they make me so happy! We had to split up our sectional to make it fit in here (so we have the two long pieces facing one another as if they’re two separate couches and then the corner piece in storage in the basement) and then on the other side of the room we have these two chairs, our coffee table, and a chaise longue from my parents’ house that I need to have reupholstered. It definitely required some creativity to figure out how to maximize seating in here and it’s not perfect (you’ll see what I mean when you see the sectional split up — there are arms on one side and not the other which drives me a little crazy!) but I can’t justify buying new sofas for a rental house so we’re just going to make it work! 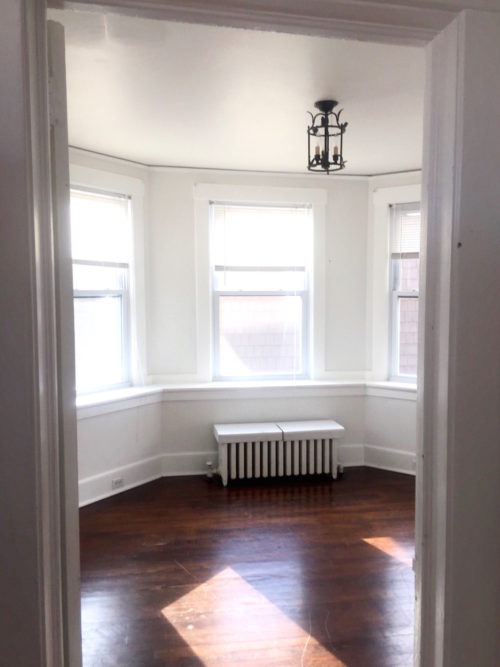 Even though I have a home office upstairs, I’ve been spending most days working from the dining room table. Again, the light! The radiator isn’t the prettiest thing I’ve ever laid eyes on but you can hardly see it now that our dining table is in place. And my mom went over and restained the floors before we moved in so they look so much better than they did when I took this picture! Moms are the best. 🙂 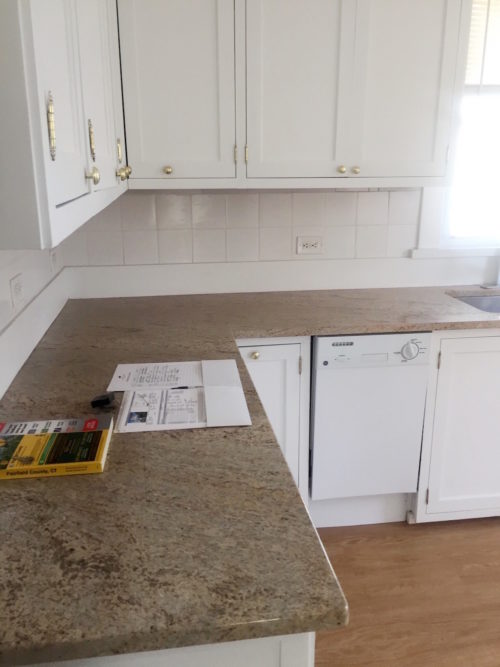 The kitchen isn’t anything special but you may recall that we’re not the world’s best cooks. 😉 The teeny tiny dishwasher reminds me of the one my host family had when I studied abroad in France! Cute but not super practical. Anyway off the kitchen there’s a little powder room (that apparently gets no heat so it’s currently freezing cold haha) and then a back porch looking down on the backyard. I’m so excited to have a yard for Rory once it warms up and I imagine we’ll want to get a grill, table, and chairs out there so we can take advantage during the summer months! 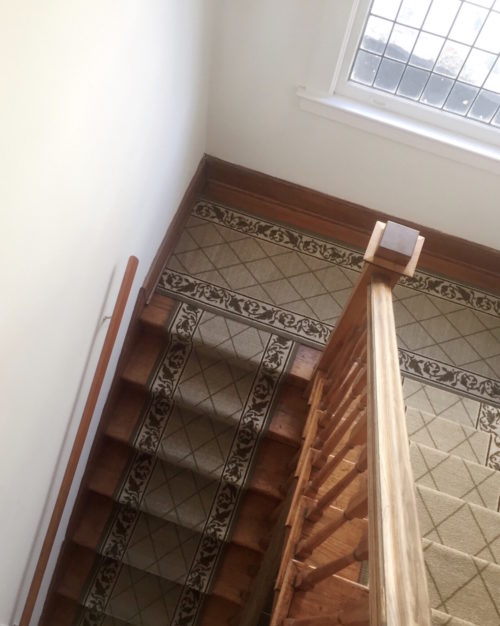 I love, love, love this giant window in the stairwell. The homeowners actually gave us permission to rip out the yucky stair runner so that might be a blog-worthy project for us at some point but it’s definitely not a top priority at the moment! 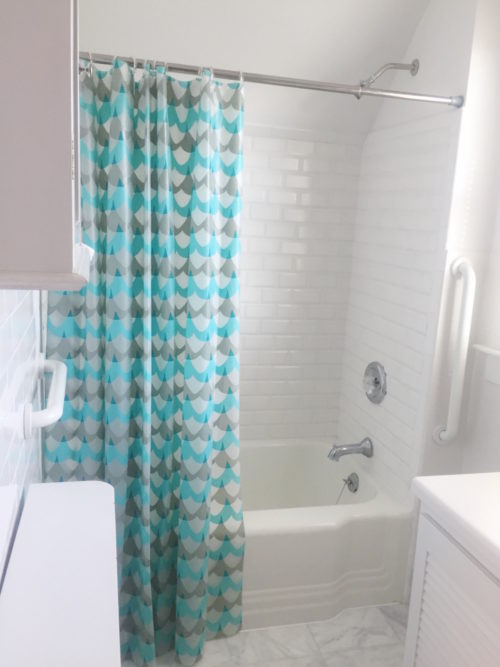 This is the one full bathroom in the house and it’s definitely a tight squeeze relative to what we had in Dallas (but, hey, still a step up from either of my apartments in New York!). But it’s clean and looks a lot better after my mom and I hung the monogrammed shower curtain from our old guest bathroom. We also added the blue and white bookshelf that used to be in our living room to provide a little extra storage to the left of the sink… Will’s biggest pet peeve is when I leave my makeup bag in the sink (a bad habit from my tiny studio apartment days!) so hopefully that will help clear some of the clutter. 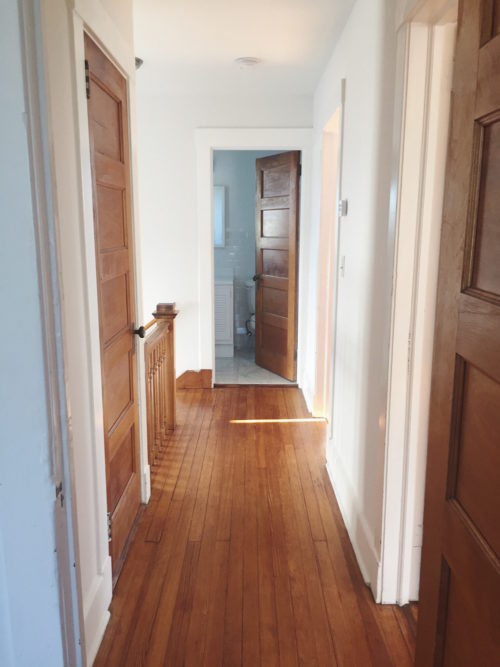 Here’s a view of the upstairs hallway: attic door and stairs to the left, bathroom at the end of the hallway, my office at the top of the stairs, our bedroom to the right, and taken from what will be Will’s office. The bedrooms and closets are pretty tiny so we decided to each have our own closet-meets-dressing-room instead of trying to squeeze in another bedroom. While it was nice to have a guest bedroom in Dallas, most of the time it was space that didn’t get a ton of use. Plus my parents are a quick 10- or 15-minute drive away so Will’s parents can always stay with them when they visit. We gave the full mattress from our guest bedroom to my brother Grayson who just moved into the city so if we change our minds and decide we do want a guest bedroom in this house, we decided we’ll upgrade to a queen mattress. (P.S. We sleep on a Casper and it’s the best!) 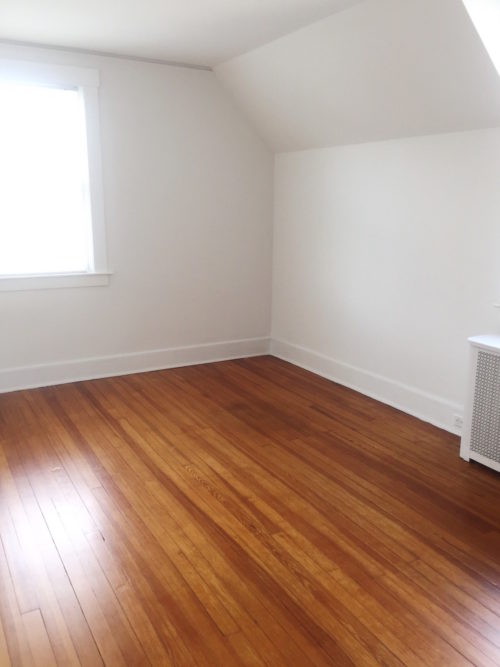 This will be Will’s office… It’s bigger than the room I chose and has the better closet but of course I stole the room with the best light — are you sensing a theme here? I’m kind of excited for Will that he gets to have a little man cave in this house and that I can have a girly girl office right down the hall. 🙂 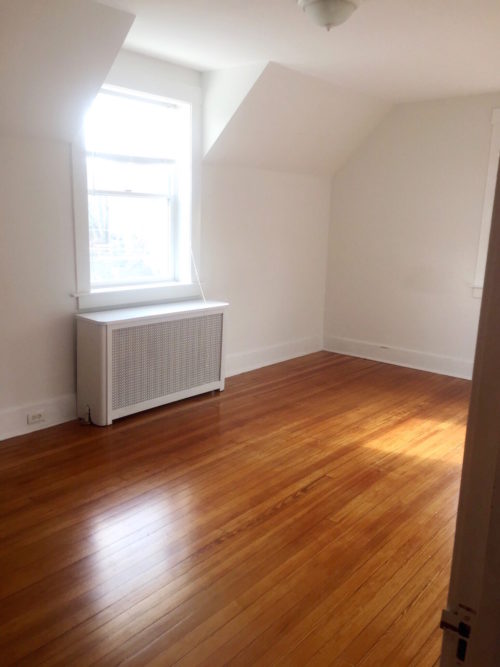 Last but not least is our bedroom! We have the bed set up on the wall opposite the radiator and a dresser off to the left. I was super nervous about our headboard and bedside tables being able to fit along that wall but they fit perfectly! Like our new living room, it’s not the most efficient layout but it gets the job done without us having to order any major new furniture pieces. And probably the most underrated part of the house is the basement, which is totally not worth photographing but has come in handy for hiding lots of boxes, books, and Design Darling inventory as we slowly get settled.

So there you have it! I’d say we’re 75% of the way unpacked and then I’ll probably spend a few weeks (read: months) fussing and moving things around, figuring out what else we need, etc. But I’m excited to share! The house is obviously very different from our last place (built in the early 1900s vs. new construction) but I love all the charming little details and can’t wait to make it feel like home. 🙂

28 thoughts on “BEFORE PICTURES OF OUR NEW HOUSE”