Today’s post is a long one, but one that holds a lot of meaning for me and my family. I asked my mom to help write about our family’s history on Nantucket, where Will and I will be married this September. I know Nantucket has become a hot vacation destination in recent years, but to me it is the place that connects my siblings and me to our parents, our grandparents, and their parents and grandparents dating back to the 1880s.

It’s the place I visited the summer before I was even born, the place I learned to swim with all my siblings and cousins, the place where I’ve ordered the same ice cream flavor the past twenty-seven years and counting. It’s where my parents were married and where I grew up knowing I’d want to be married too, the place where we scattered my grandfather’s ashes, and the place that Will and I will become husband and wife.

It’s a place that is never easy to get to but always worth the trip, a place with a rich history and incredible natural beauty. It is so much more to me than a pretty backdrop for our wedding and so I asked my mom and Grandy to help tell the story of my family and our favorite place. I’m so happy to have a digital home to record all these stories and I hope they will interest some of you as well. I hope you enjoy! 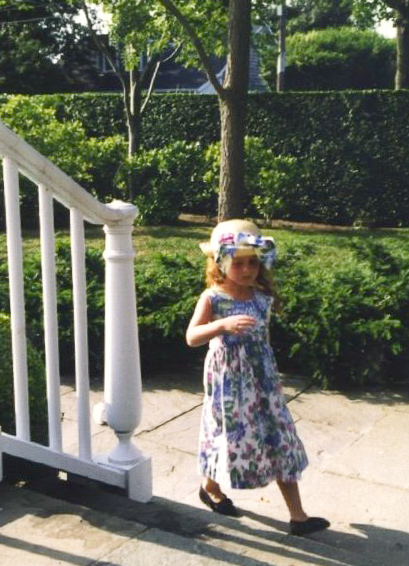 Walking into ‘Sconset Chapel, circa 1994. Here’s hoping I look this good come September! 😉

Our family’s love affair with Nantucket started well over a hundred years ago.

Dr. Charles Oliver, my great-great-grandfather, was an eye surgeon at Philadelphia Wills Eye Hospital. It was 1887 and he had just completed a fairly new procedure called cataract surgery. In those days, patients recuperated for days in the hospital with sandbags positioned on either side of the head to ensure immobility. (Today this same surgery takes no more than 30 minutes and you can be out the door 15 minutes later, according to my mom, a peri-operative nurse.)

Dr. Oliver’s patient informed him that he couldn’t afford to pay him for the surgery, but that in exchange for his new eyesight he would give him two plots of land on the North Bluff of an island off the coast of Massachusetts.

My great aunt, Katharine Stanley-Brown Abbott, wrote that Charles Oliver visited Nantucket for the first time in 1887. To get there, he took the train from Philadelphia to New York, sailed on an overnight steamer up Long Island Sound, arriving in Fall River the following morning. From there, he took two more trains to reach New Bedford, traveling via the paddle wheel steamer Nantucket to reach the faraway isle. My siblings and I used to complain about the four hour drive and two hour, 15 minute slow ferry from Connecticut — imagine an almost two-day trip!

After seeing his land in Siasconset, Dr. Oliver asked his driver for the name of the best builder on the island and was told George Gibbs. For $1,200, Gibbs would build my family’s first summer house (1889-1979) called Sunnycliffe on the North Bluff, halfway between Sankaty Light and the village of ‘Sconset. This would be his wedding present to his then fiancée, Mary Henry (Will, are you reading this? 😂). 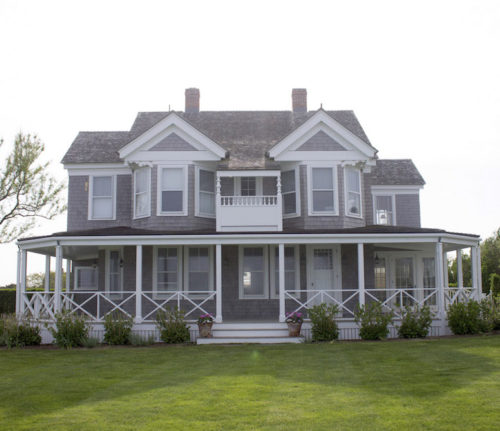 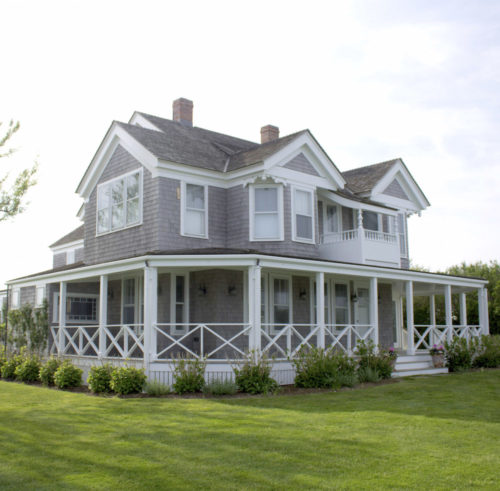 Sunnycliffe as seen from the ‘Sconset Bluff Walk, one of my favorite ways to spend a summer afternoon.

Charles and Mary arrived at their new “cottage” in June 1889 with their two month old son, Norris. The house was much bigger than the Olivers had imagined: three stories, six bedrooms, several balconies and porches that overlooked the Atlantic. The interior was pine tongue and groove with no visible nails anywhere. Three fireplaces warmed the home, together with a coal stove in the kitchen. Gibbs claimed that the $1,200 allowed him to build the house like the ships he was accustomed to building and to completely furnish it with beautiful rugs, painted wooden furniture, and elaborate wicker pieces that my grandmother still owns today. “On the floors there were hooked rugs. Thin, ruffled curtains fluttered at the windows, light enough to let in sunshine without spoiling the view. An atmosphere of summer pervaded the house. Mr. Gibbs had thought of everything,” Katharine Abbott wrote.

With the industrial surge of 1870s, people wanted to escape the heat, filfth, and disease pervasive in American cities. The Olivers were no exception: from June until August each year, they would entertain a constant stream of guests at their home on Nantucket. In 1895, Mary acquired a guest book and encouraged all visitors to enter a line or two reflecting on their stay. Segments of songs, stanzas of poetry, and original prose fill the early pages. Full page watercolors and caricatures emerged during the twentieth century. The guests’ comments share the feeling that “‘Sconset and Sunnycliffe offered a special, elusive ambience that would remain in their minds and hearts forever,” wrote my great aunt Katharine. When my grandparents sold Sunnycliffe in 1979, there were several volumes of the guest book, featuring hundreds if not thousands of entries. My parents have preserved this tradition with their own guest book that sits on the entry table of their home. We have a long way to go to get to thousands of entries, but we did just need to order a second volume! 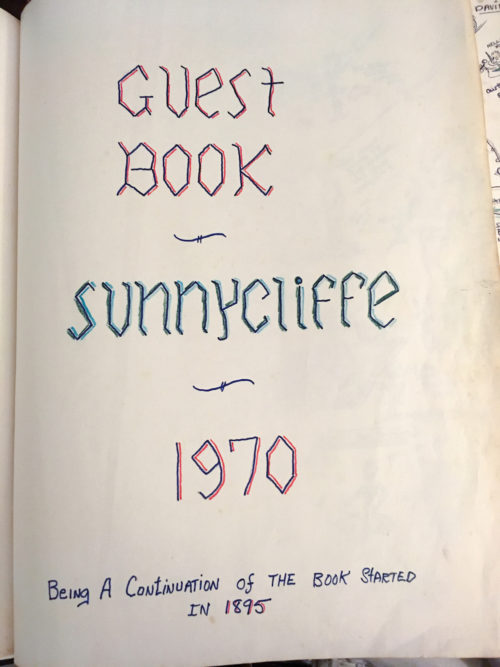 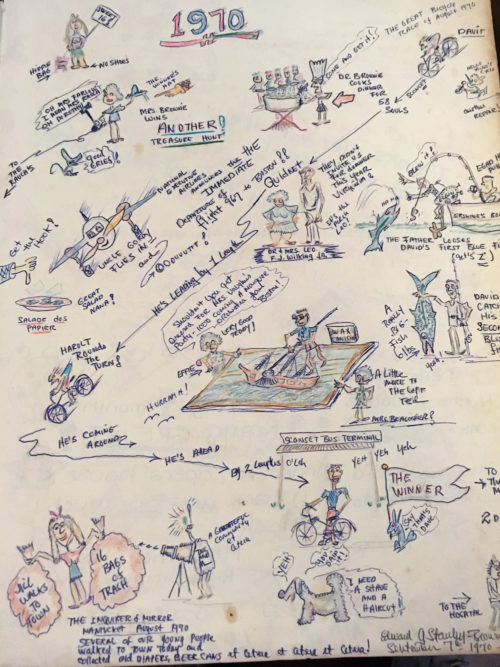 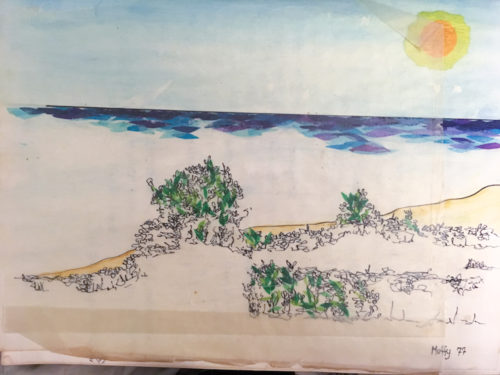 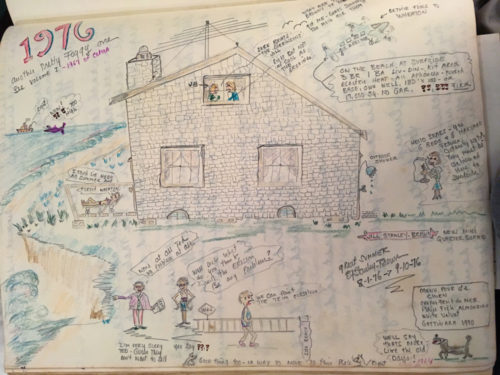 Mary and Charles Oliver had two children, Norris and Katharine. Katharine was my grandfather’s mother, a musician, and an author. My mother recounts nights spent around the Steinway grand piano during her childhood summers on Nantucket with her grandmother playing showtunes and all the adults drinking and singing. The piano was in a beautiful panelled room that was intended as the formal dining room, but Katharine preferred the room for a different type of entertaining. As a teenager, her son Edward Stanley-Brown (my grandfather and my mom’s dad), built a bar for this room. He and a friend, Bob Benchley, painted the facade of the bar during a three-day Nor’easter with different images of drinking terms: dead stiff, hollow leg, and under the weather to name a few. The bar was left in the house when my grandparents sold it, but was acquired by the Benchley family when one of the new owners of Sunnycliffe was going to renovate. This bar hasn’t been seen by my mom, her siblings, or their mom (my Grandy) for over thirty-seven years, but it will be at our welcome party at my parents’ house in September, on loan from the Benchleys. I can’t wait to see it in person!

My grandfather Edward (whom we called Grandpeter for reasons unclear to this day) was a pediatric surgeon at St. Luke’s Hospital in New York City. He spent every summer of his life on the island except for the year he served in the Korean War. He worked all year to be able to savor the thirty days of rest he got on Nantucket every August. He was an avid reader, fisherman, and chef. One of his greatest joys was to wake early and visit Bartlett’s Farm and Glidden’s fish market to see what had been harvested or caught that day. Grandy, my mom, and her siblings would often return from a day at the beach or the tennis court to elaborate dinners prepared by Grandpeter in the kitchen at Sunnycliffe. 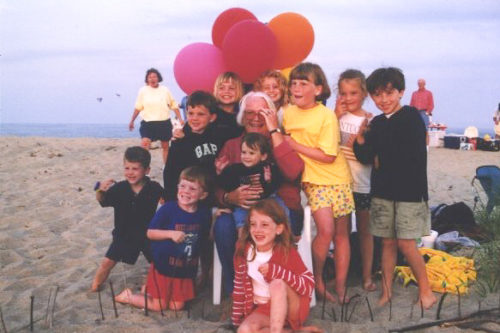 Grandy with all her grandchildren on ‘Sconset Beach, circa 1998.

My mom has spent time on the island every summer of her life as well. As she and her brother and sister grew up, they worked several jobs on the island over the years. Both my mom and Aunt Jill worked at Moby Dick, a series of small cottages and a restaurant on the southeastern shore of the island in ‘Sconset. That business was sold in the 1980s and was renamed the Summer House, where Will and I will have our wedding reception on September 2. We feel so lucky! 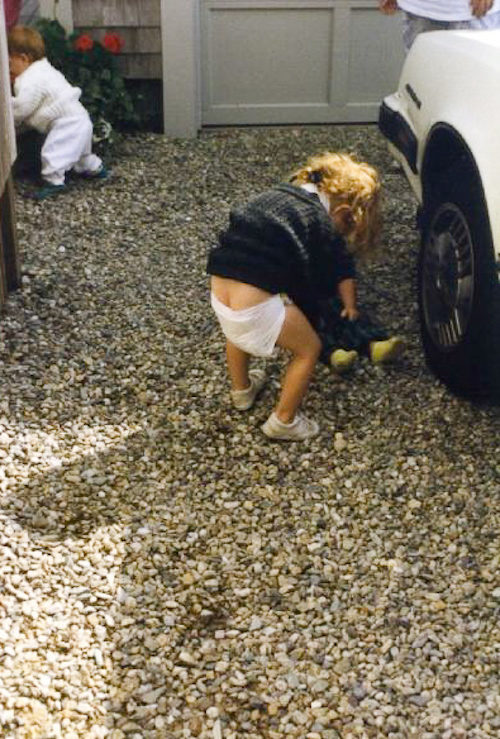 My cousin Emily stuffing rocks in my diaper at Windmoor, circa 1991.

My grandparents bought their own house, Windmoor, in Tom Nevers in 1980. Grandy started going to the island with her husband in 1952 and continues to spend the summer and early fall there each year. She is a very active needlepointer (even as she approaches her 90th birthday!) and was part of the original group of women who started a project to replace the old brown vinyl kneelers at the ‘Sconset Chapel with beautifully needlepointed kneelers designed by one of Nantucket’s most cherished artists, Erica Wilson. It was a project that was slated to take five years, but Grandy and her friends had all 200 kneelers completed in less than two. The kneelers feature Nantucket birds, fish, flowers, and historical buildings and are truly the crown jewel of this quaint chapel. Will and I will kneel on two of these needlepoint kneelers during our wedding ceremony. My mom and dad were also married at the ‘Sconset Chapel almost 31 years ago to the day. (I’m told their knees got stuck on the old vinyl kneelers, however.) 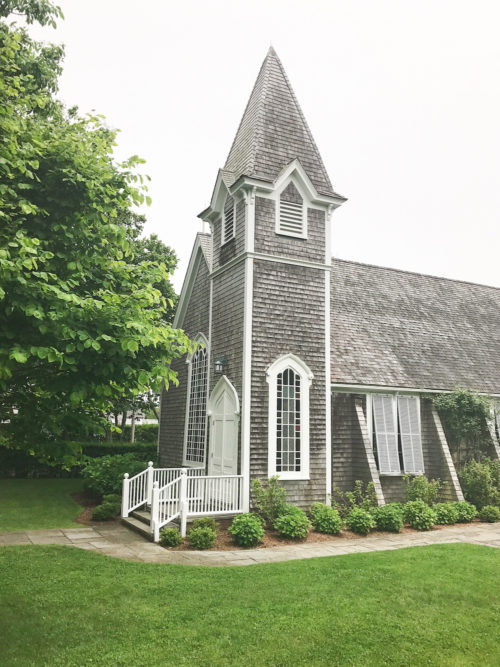 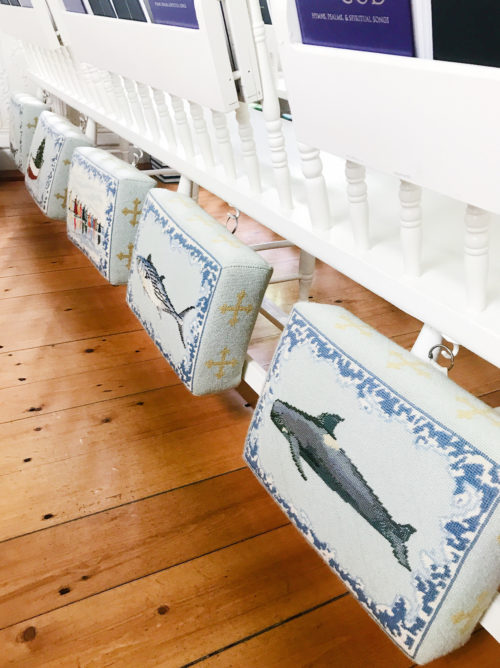 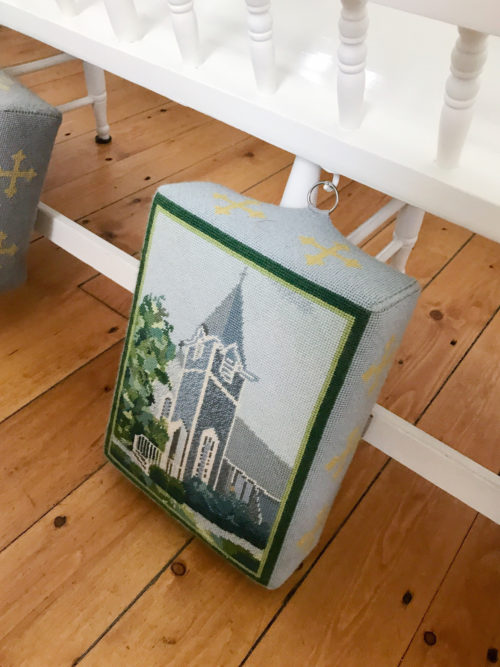 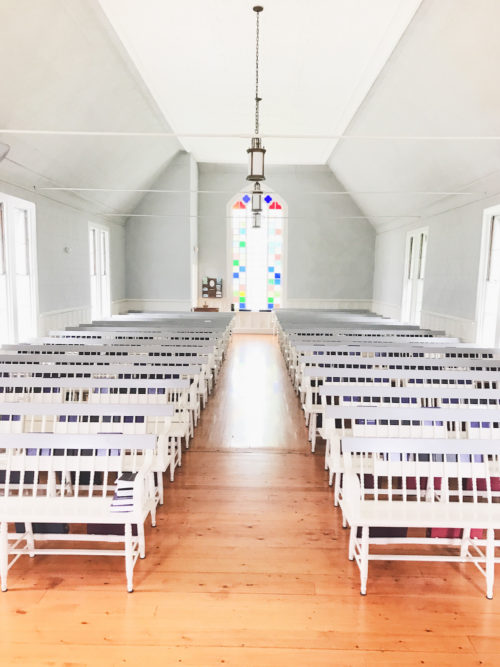 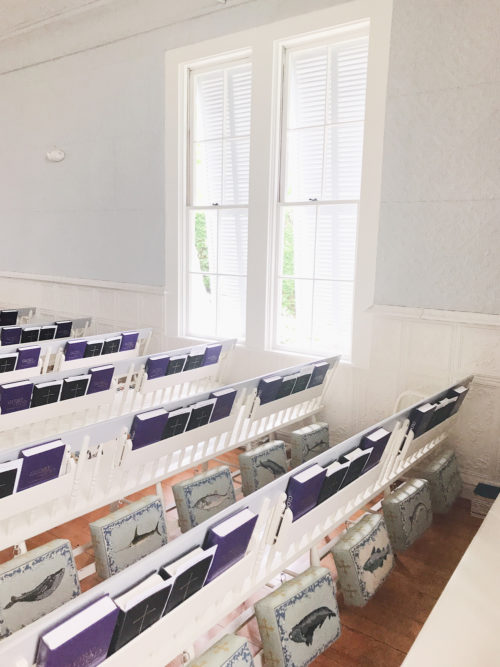 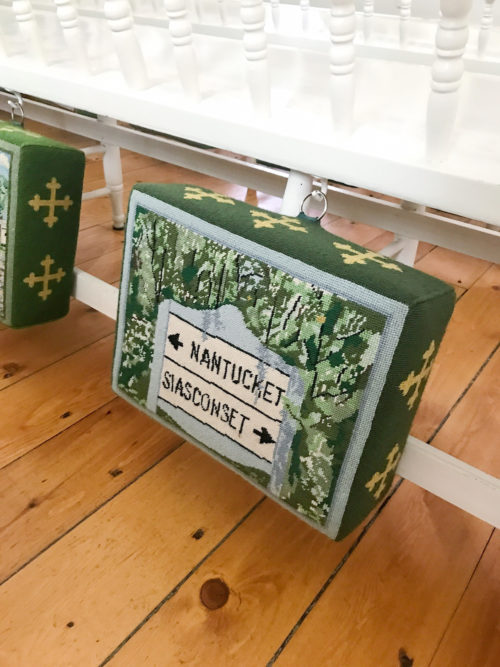 Our rehearsal dinner will be at the Chanticleer, where my parents had theirs as well. My dad’s parents, Liz and Ted Horan, hosted that special event, recounting their own memories at the Chanticleer, which was once a series of cottages and a restaurant where they had spent their honeymoon in the 1950s. 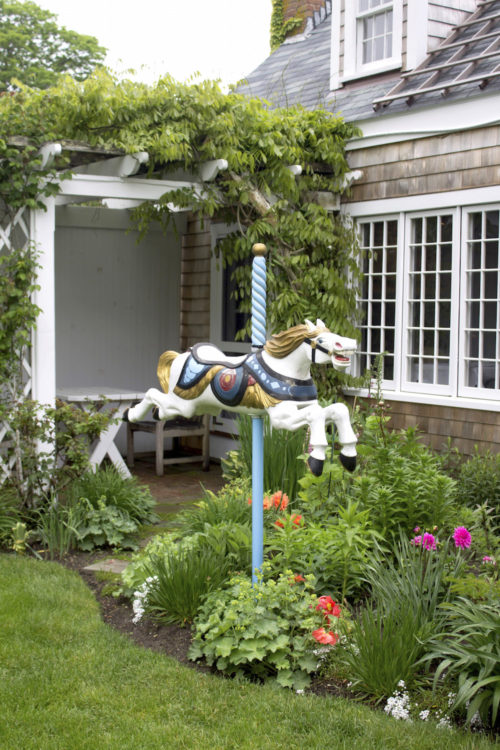 The entrance to The Chanticleer.

My sister, brothers, and I have also grown up spending summers on Nantucket. We started staying at Grandy’s home with our cousins. As all of our families grew, my parents felt it wasn’t particularly relaxing to have eight adults and nine grandchildren staying under one roof. They started renting houses when I was in elementary school and ultimately purchased their own home fifteen years ago. 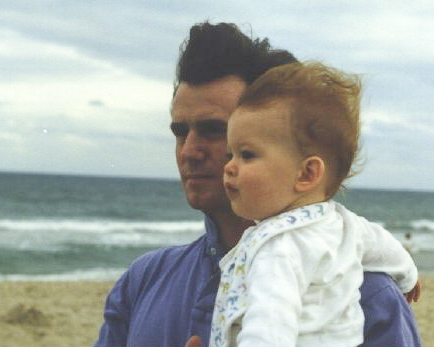 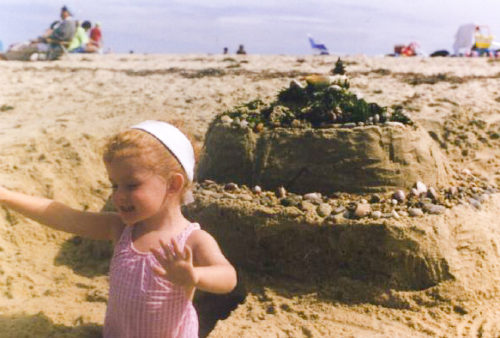 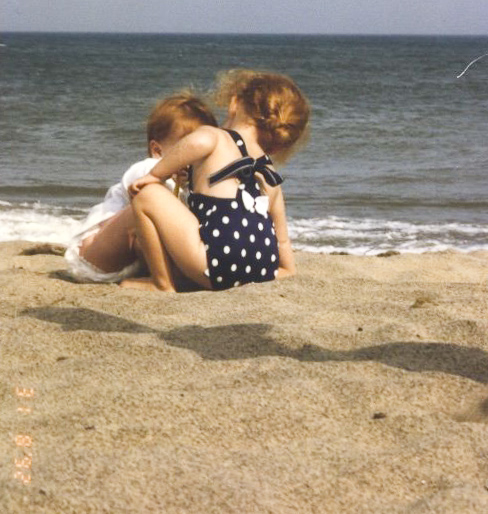 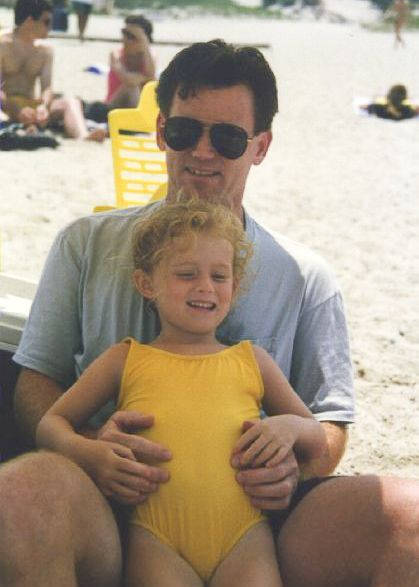 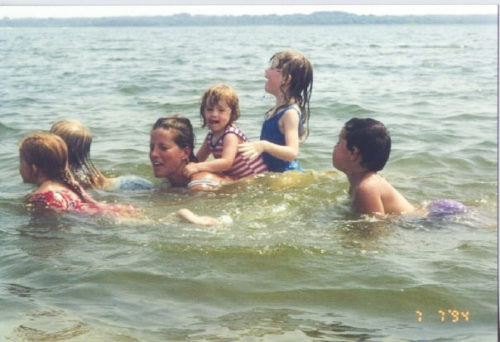 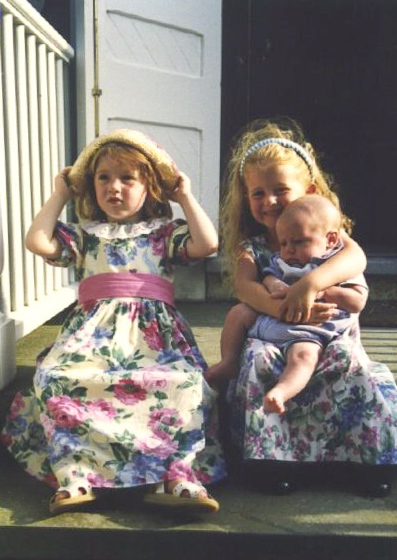 I remember bringing Will to the house about six months after we started dating and praying he would love Nantucket, knowing full well it would be a deal-breaker if he didn’t! Thankfully he fell in love with Nantucket (and ultimately me! 😉) and it has been our favorite escape together ever since. Our welcome party the night before our wedding will be held in my parents’ backyard, with a food truck from the restaurant in Madaket where my sister, brothers, and cousins have worked for the past several summers. The whole weekend will be a joyous celebration in a place that means so much to Will, myself, and my family. Will’s parents have also been out and, while a long way from Texas, I think the island has found a special place in their hearts as well. After all, what’s not to love? ❤️ 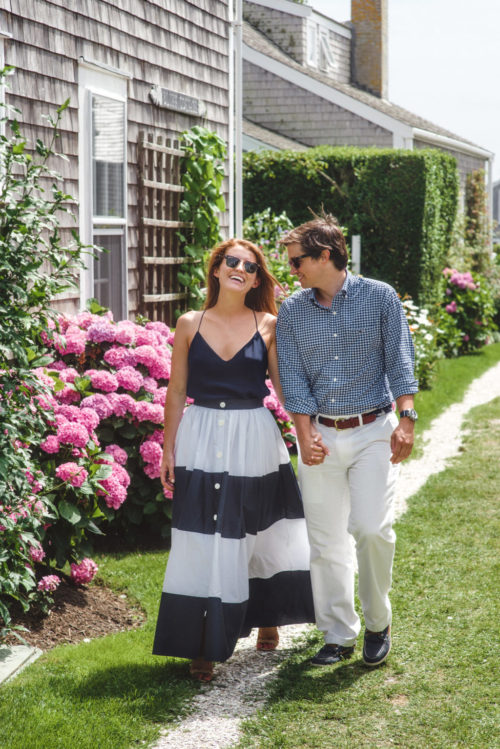 126 thoughts on “WHAT NANTUCKET MEANS TO ME”