I know I’m a day early on this week’s rose and thorn but we’re mixing it up because Gal Meets Glam’s newest collection launches tomorrow and I get to share one of the darling dresses with you! And if your week was anything like mine, today totally feels like a Friday anyway. But we’re leaving for France tomorrow night so there’s definitely a light at the end of the tunnel! 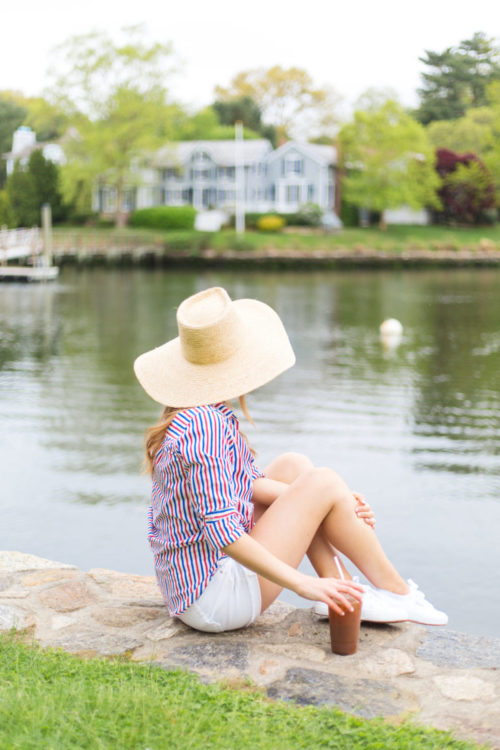 This week’s thorn was the fact that I crashed my mother-in-law’s car over the weekend. Ick. No one was hurt, thank goodness, but it was completely my fault (I somehow thought oncoming traffic also had a stop sign and clearly they did not) and I felt and still feel like the biggest idiot in the world. It’s the only accident I’ve ever been in where the airbags went off so I was pretty shaken up about that, compounded by the fact that I wasn’t in my own car and had now caused a huge headache for my in-laws and the woman whose car I hit. Everyone could not have been kinder or more understanding and I’m so thankful for how they handled it, but it’s something I will forever feel terrible about.

This week’s rose is on a total different note: getting my first Fraxel treatment to treat sun damage on my face. The med spa I’ve been going to in Westport is now offering Skin Scope imaging with every free consultation, showing you damage under the surface of your skin — and let’s just say I was shown the light about protecting myself from the sun. (You can see my Skin Scope images and daily progress updates on my Instagram highlights or schedule your own free consultation here if you’re interested.) I’m currently on day four which means my skin is in the “shedding” process and hopefully most of my sunspots will be out of here in the next couple days. I’ve since heard from so many of you who have done or are interested in doing Fraxel, including a few people who have done it after skin cancer scares to clear up sun damage before it becomes a more serious problem. I’ll definitely write a post about my results, but my plan as of now is to enjoy the clearer complexion from this first treatment, get way more serious about daily sunscreen application to prevent future damage (I’m now using this sunscreen), and have Fraxel done again every couple years as new spots come to the surface (from previous damage that you can see on the Skinscope). Obviously having my face peeling off isn’t the greatest feeling in the world, but I feel good knowing I’m reversing past damage and really committing to protecting my skin going forward. Have a great weekend and stay out of the sun! 🙂

13 thoughts on “THIS WEEK’S ROSE AND THORN”