If you follow me on Instagram, you know I got my first Fraxel treatment four weeks ago and have been getting a ton of questions about what it does, where I went, whether it hurts, what the recovery is like, and whether I’m happy with the results. I’m so excited to answer all those questions and share my before and after with you today! 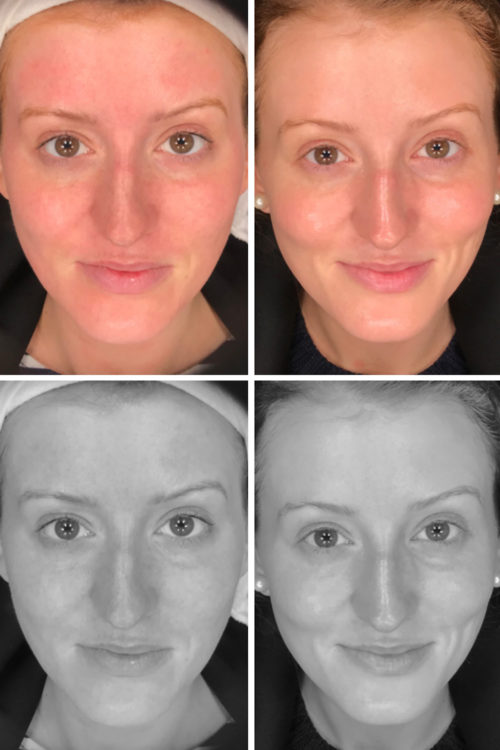 Left photo taken on May 21 just before Fraxel treatment; right photo taken on June 15. I included a black and white version in case it’s easier to see the difference, but overall my skin looks clearer, has fewer spots and reduced redness, and feels so much softer and smoother!

What is Fraxel? Fraxel is a laser resurfacing treatment that can be used to treat sun spots, fine lines, acne scars, melasma, and/or pore size and leaves you with healthier skin at a cellular level. A single Fraxel treatment targets approximately 20% of your skin’s surface, leaving surrounding tissue intact to expedite the skin’s natural healing process and speed up the production of new collagen and elastin.

Why did you do Fraxel? I booked a consultation in the hopes of addressing sun spots on my face, which were becoming more and more prominent after 28 years of admittedly inadequate/inconsistent sun protection. When I found out that Fraxel could not only reduce the appearance of sun damage on the surface of my skin but also permanently remove spots before they became potentially hazardous, I literally booked my first treatment on the spot. I’ve since heard from several other people on Instagram who have done Fraxel as a preventative measure after skin cancer scares, so I kind of think of my Fraxel treatment as a reset button for reversing past damage and encouragement to protect my skin from the sun going forward.

Why did you choose Fraxel over IPL, etc.? I had initially inquired about IPL after a girlfriend of mine had told me about it but the place I went to said Fraxel is now considered the gold standard in terms of laser resurfacing (they do less than a dozen IPL treatments a year vs. hundreds of Fraxel treatments). I’ve had several of you ask whether I’ve tried microdermabrasion or micro-needling and I haven’t done either, but I’d love to hear from any of you who have tried these and how they compare to Fraxel if you’ve done both!

Where did you get Fraxel and how much did it cost? I went to Westport Medispa and highly recommend it if you’re local. They do free Skin Scope photos with every consultation so you can see beneath the surface of your skin, which is kind of like a glimpse into the future (mine was a pretty huge wake-up call as you can see below). I love that Dr. Brownell is a board-certified physician in aesthetic medicine, plus her own skin is literally glowing so you know she’s doing something right. One Fraxel treatment cost $1250 for my entire face, which is obviously an investment (but then again it reverses years of sun damage so I can think of way worse ways to spend the money). Apparently some people do a couple Fraxel treatments a year, but as of now I plan on repeating it every couple years as new (previous) sun damage comes to the surface and of course taking way better care of my skin in the mean time. 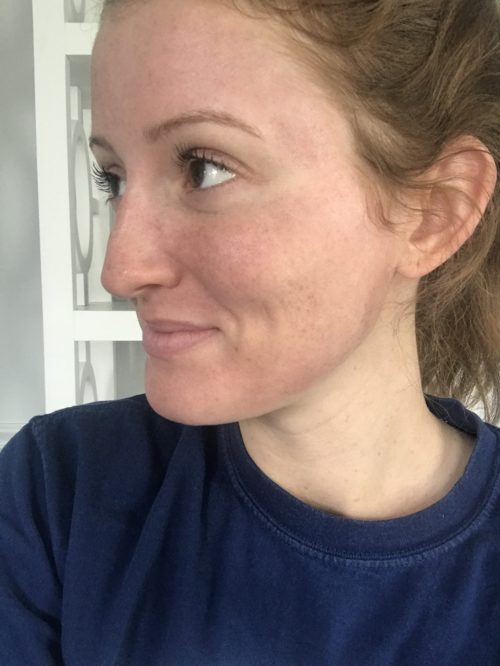 Photo taken on May 23, day three post-Fraxel. My face was super red and felt like sandpaper and you can see the sun spots on my cheeks that had darkened before shedding off.

Does Fraxel hurt? How long does it take? On the day of my appointment, I got an hour-long hydrafacial (which I’m trying to make part of my ongoing skincare routine every 4-6 weeks) to make sure my skin was super clean before being treated with the laser. Then the aesthetician applied a topical anesthetic which stayed on for another hour before Dr. Brownell came in to do the actual treatment, which took less than 30 minutes. I was nervous about how bad it would hurt but honestly it was more like a prickling or stinging sensation than actual pain. Afterwards it felt like a bad sunburn, but clearly that’s something I was already pretty familiar with as a redhead with fair skin. Honestly Fraxel was so much less painful than I was expecting and the discomfort afterwards was totally temporary, so I definitely wouldn’t let that deter you if it’s something you’re considering!

What is the downtime for Fraxel? I was told to expect a 5-7 day recovery and I would say it was definitely closer to 7-8 days before I started to see real results. On the afternoon of the treatment (day one), I looked like I’d gotten a bad sunburn and my skin felt really warm for the first couple hours. On day two, my skin was still really red, but it’s something I could easily have covered up with makeup if I’d needed to. The “shedding” process began on day three, starting with the middle of my face and moving out from there, and my skin texture felt like sandpaper, something that would have been very difficult to cover up with makeup given the uneven texture. I would literally see brown spots peeling off my face which was so satisfying, but also very hard to resist picking at if I’m being honest! I had to resist the urge to scrub, exfoliate, etc. as you’re really supposed to just wait it out. Days three and four are the days I would recommend scheduling your downtime for (so if you’re off on weekends, for instance, I’d get Fraxel done on Thursday after work, be able to wear makeup to work on Friday, and recover at home Saturday and Sunday). You can see videos from my first few days post-Fraxel on my Instagram highlights if you’re interested! I used a ton of moisturizer on days 3-7 because my skin was flakey and felt super dry — I’d decided to splurge on the smallest size of this one the week before and I was so happy I had it on hand because it was the only moisturizer I had that really seemed to penetrate my skin vs. sit on top of it if that makes sense. A week after the treatment, the redness was totally gone and my skin felt the smoothest it’s ever felt, save for a few remaining dry patches near my hairline that needed a couple more days to peel. 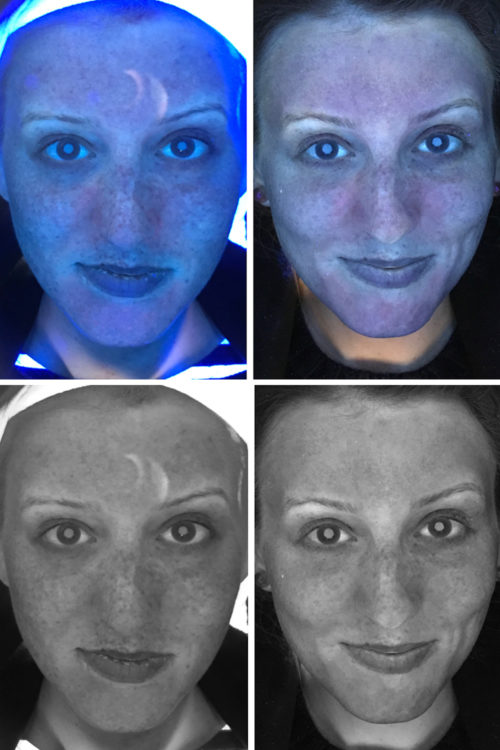 Is Fraxel worth it? Are you happy with the results? Today marks four weeks since my first Fraxel treatment and I feel like my skin has gotten better every week. Last week I went back to the med spa to have a second set of Skin Scope photos taken so I could assess the difference not just in the appearance of my skin but also beneath the surface and I think the before and after speaks for itself! In terms of the appearance of my skin, it feels clearer, softer, less freckly, and less red in general. In the photos depicting underneath the surface of my skin, I notice a huge difference in the number of spots on my forehead, my nose, and my cheeks, but I can see why people do multiple treatments as there is clearly more existing damage waiting to come to the surface. It’s definitely motivation for me to lather on the SPF this summer (I’ve been using this sunscreen it hasn’t made me break out like past sunscreens I’ve tried) and to keep up with Fraxel treatments every couple years as I get older. I love knowing I’m making a difference beneath the surface of my skin in addition to feeling better about what I see in the mirror, so to me that’s worth every penny!

Have you tried Fraxel or any laser treatments on your skin? What treatments do you swear by? I’m pretty new to all of this and loved getting to be a human guinea pig and share this with all of you!

P.S. If you’re local and want to give Westport Medispa a try, mention my name when you book your consultation and they’ll give you 10% off your first treatment!

12 thoughts on “MY FRAXEL BEFORE AND AFTER”

My mom and I recently spruced up my parents’ Nan