Hello and happy Friday! This week was a bit of a killer as I spent Wednesday night in the ER passing a kidney stone (I hadn’t had them since I was 14 so I was rather displeased to have them return!). If you’ve ever had one, you know kidney stones are about as painful as it gets so I’m very relieved to have that behind me and without surgical intervention. Anyway! We are home this weekend before kicking off several back-to-back travel weekends so we’re planning on hitting up some open houses (the house hunt continues…) and otherwise taking it easy after a not-so-easy week.

In more exciting news, my husband Will is taking over Design Darling for the first time ever today sharing his answers to the questions you submitted on Instagram last week and I have to stay I couldn’t stop smiling while reading his answers! I told him he could write 2-3 sentences for each one and he clearly went above and beyond in terms of thoughtfulness and further recommended reading. 😂 (Seriously each of his answers could be its own blog post!) I think you’ll get a good glimpse as to why he’s the smartest person I’ve ever met and one of the most thoughtful too. Enjoy! 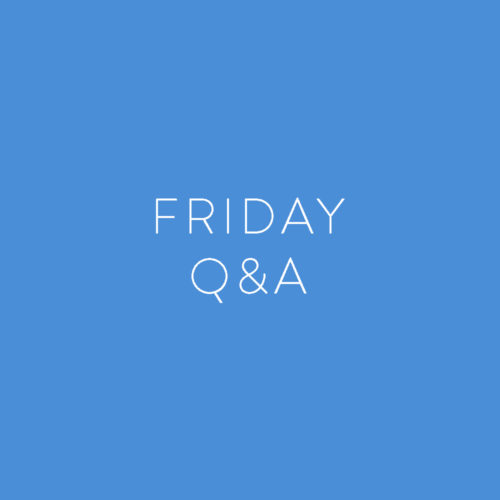 1. What do you for work? What is it about your career that inspires you to get up each morning?

I love my job, as it satisfies two very important personal criteria. First and most important, I’m extremely curious, and the job allows me to spend 90%+ of my time learning. I’m a lifelong learner and a voracious consumer of information, whether that’s listening to a book on Audible, scrolling through my Twitter feed, catching up on one of my favorite podcasts, or reading long form books. Each morning, I wake up and get paid to learn more about how the world works. Furthermore, that knowledge compounds over time. Second, despite some of the headwinds the industry faces, investing is generally a job where I can bet on myself. Hedge funds as organizations tend to have very flat (or no) hierarchies, and bureaucracy rarely stymies a successful analyst in my industry. While success in any field certainly involves a healthy dose of luck, I focused on choosing a career where the returns on skill were high.

2. Thoughts on commuting to Greenwich?

Like any non-native New Englander or New Yorker, I always dreaded the idea of commuting. When I worked at my last job in New York, I used to antagonize my older coworkers with comments like “you know, you could be halfway to London with your daily roundtrip commute”. When we lived in Dallas, I often joyfully reflected on my six-minute commute, as I was aware of headlines like “adding 20 minutes to your commute makes you as miserable as getting a 20% paycut.”

All of that said, it’s not half as bad as I thought it would be. While I’d be lying if I told you’d I prefer commuting two hours roundtrip each day to the days I get to work from home, I stay very disciplined about how I spend the commute, and I truly don’t mind it. Typically on the walk from our house to the train and the walk from Grand Central to my office, I listen to Audible or podcasts on Breaker. On the train to the city, I try to read a book unless I’ve got an exceptional morning (e.g. a company prereleased its earnings results and I’m trying to figure if I’m about to have a seriously bad day). On the way home, I’ve usually got something I failed to get done before I belatedly started sprinting to Grand Central from my office (like the answers for this post… sorry, Kenzie!).

Also, I’ve recently adopted Jim Collins’ suggestion from the Tim Ferris podcast to track creative work using a stopwatch app. I’ve adapted his suggestion to hit 1,000 hours of creative work for every rolling 365 day period and have set my own goals. I use the app Timer+ and track hours spent (1) doing deep work, (2) reading longform books, and (3) listening to podcasts/Audible. Like all my lifehack habits, I’m sure I’ll lose steam at some point, but I’ve enjoyed it so far!

3. Where did you go to school and what’s your advice for making the most of those four years?

I went to Princeton in the underrated state of New Jersey. It’s a great question, as during my freshman year, I did an absolutely horrible, abysmal, no-good job of making the most of that year. The backstory is that I wanted to make the varsity tennis team, and I had delusions of grandeur of being Princeton tennis’s next version of Rudy. After six months of practically groveling with the varsity coach, I faced reality: I wasn’t going to be a member of that team.

The issue with coming to that realization in February of my freshman year was that I’d missed most of the window when no one knows anyone and is therefore open to meeting anyone. So suddenly I was just this weird dude who studied a lot and had spent the last six months playing a lot of tennis against high schoolers and middle-aged townies — not a good look. I actually got so desperate that I tried to transfer out.

After being summarily rejected by Harvard and Stanford, I had to take a deep look at my approach and change my mindset. I decided I was going to basically join any and every on-campus club that would have me. Over time, I met a lot of great folks, snuck my way into an eating club, and met four guys who would be groomsmen in our wedding.

So based on my experience, my advice would be to be open about what you’re interested in and try to overindex on meeting people early on. You can’t meet too many people in the first few monthsof your freshman year. Really try hard not to say no to an invite those first three months. Second, be open to changing how you think about yourself. For ten years, I had played very competitive tennis, spending ~20 hours each week training. I had always thought of myself as a tennis player. Over time I realized my inflexibility about my own identity had hampered being a successful college student early on. Finally, realize that all you’re going to remember are the great nights out spent with friends. One good way to soak in those experiences is to reflect while they’re happening on how much you’d pay to relieve them 20 or 50 years from now. My hunch is that the answer will be capped only by how much money you have, not by your eagerness to pay.

4. What’s your favorite thing about Mackenzie? How did you know she was the one?

My absolute favorite thing about Mackenzie is the deep empathy she feels for others. As you can probably tell just from reading this post so far, I skew much further on the purely rational end of the empathy-rationality spectrum, and over many years of effort, she’s slowly straightened me out. Her great looks and dry wit don’t hurt either!

I knew she was the one pretty early on once we started dating. One night we were out to dinner at Tartine in the West Village and I just remember thinking that there wasn’t anyone I’d rather spend the rest of my life with. It was also the first night we said I love you. When a buddy of mine and I were talking about relationships later that year, he remarked that you want your life partner to be someone you’d always rather have alongside you than not, whether you’re at a party, catching a movie, or doing nothing on the couch. I’ve always thought that’s a great mental model, and there’s absolutely no one I’d rather do life with than Kenzie.

5. What’s your favorite item or outfit for Mackenzie to wear? Anything you don’t like?

I like when she’s in something she loves and is comfortable in. Like when she’s in a pair of white jeans and a navy sweater, I know she feels like herself and she looks like a million bucks. I can’t think of anything I don’t like besides when she’s complaining about how much her feet hurt after being in heels all night.

6. What is your most vivid memory on your wedding day? Any advice for grooms-to-be?

My most vivid memory from our wedding day is our first look. We did the first look in the backyard of Kenz’s parents’ house on Nantucket, and Kenz’s bridesmaids were secretly hiding in an upstairs bedroom looking out on the yard. Kenz looked absolutely stunning, and the cheers from the unexpected onlookers made it all the more special.

Other than “pick a great partner,” I would recommend trying to step back from it all a couple times throughout the night. If you can mentally time travel and think about how you’ll savor this experience years from now, you’ll soak in the experience more fully. Have fun! It’s an amazing time.

7. What are you most nervous about when it comes to being a parent?

“Everything” is the cheeky answer here, but my real answer is that when it comes to being a parent, there are known unknowns and unknown unknowns. I know I can handle the known unknowns, like the experience of changing my first diaper or figuring out how to sleep train the baby; everyone goes through maturing as a parent, just as everyone goes through maturing as a child, student, partner, and professional. I find the unknown unknowns (questions like “will the baby be healthy?”) a bit scarier — those unique situations that pop up where you can’t just say “well, everyone has to go through this.” I take comfort in (1) knowing that ultimately every parent faces a certain set of unique challenges and (2) knowing that Kenz and I make a strong team and together, we can handle whatever life throws at us.

8. What are the biggest differences in your mind between Texas and the east coast?

Where to begin? While I always be a loyal Texan (#texasforever), I’m really happy living in Connecticut.

I would say Texas is generally conducive to an easier lifestyle with more convenience than Connecticut is. In Texas, people also tend to be warmer from the outset, though we’ve certainly got a great group of friends here in Connecticut.

Connecticut is definitely prettier — the homes have a more cohesive architectural style and historic charm, the state has a beautiful coastline, and the streets aren’t laid out on a grid since many towns predate the car. The song “Levelland” by James McMurty describes a town where settlers were moving west but then their the wagon wheel breaks off and instead of fixing it, they simply decide to stay. While it pains me to say it, to some extent, that’s Dallas. It doesn’t really have a raison d’etre unlike most cities of comparable size (for instance, New York, Los Angeles, Chicago, Houston, and San Francisco are all on or near a body of water). That said, Dallas will always be my hometown, and the neon light from the Bank of America Plaza downtown lets me know I’m home.

As far as choosing a place to live is concerned, I’m a big fan of the essay “Cities and Ambition” by Paul Graham. To that end, I’m not so arrogant as to try to be a Milanese Leonardo — my chosen profession is public market investing and I like living near and working in New York. After all, it’s the city so nice, they named it twice!

22 thoughts on “GUEST FRIDAY Q&A WITH WILL!”

Welcome to Design Darling!
Join me as I decorate our home in Greenwich, Connecticut, share my style staples, and chip away at my list of 101 things to do in 1001 days.