We start construction on our second round of house projects today! You can see a list of our first round of house projects here and posts on everything we completed including removing carpets and refinishing our floors, removing a closet and moving a wall in our master bedroom, and painting and/or wallpapering in seven different rooms. We’ll have many rounds of projects to tackle in this home (as I shared in this post, we decided to buy an older and larger home that needed a lot of work but that we could live in for many years vs. a smaller home that was more finished) and this second and more involved round of projects is going to have a massive impact on how we live in this house in the years to come.

The first project (which will actually start a month after the other two) is to renovate our kitchen and powder room. This may be hard to envision in photos so I’ll do a tour on Instagram stories today and save it to my highlights, but the current layout involves a long and very narrow powder room that juts out into the center of the combined kitchen and family room, meaning that you see a wall and have to turn an immediate corner to enter the kitchen from the dining room and that the kitchen itself is much smaller than it otherwise could be. Without changing the footprint from the exterior (except for a 2’ deep picture window that will float above the ground along the back of the house), we’re going to entirely reorient the kitchen by 90 degrees such that the cabinets and appliances all live on the wall where the powder room is now and we’ll add a breakfast nook and picture window where the kitchen sink currently is. We drew out so many different possibilities for this space and I’m really excited with where we wound up, especially as we’ll be able to see from the front door all the way through the dining room and kitchen to the back of the house. Changing the orientation of the kitchen will be a much better use of space and I think it will open things up immensely! 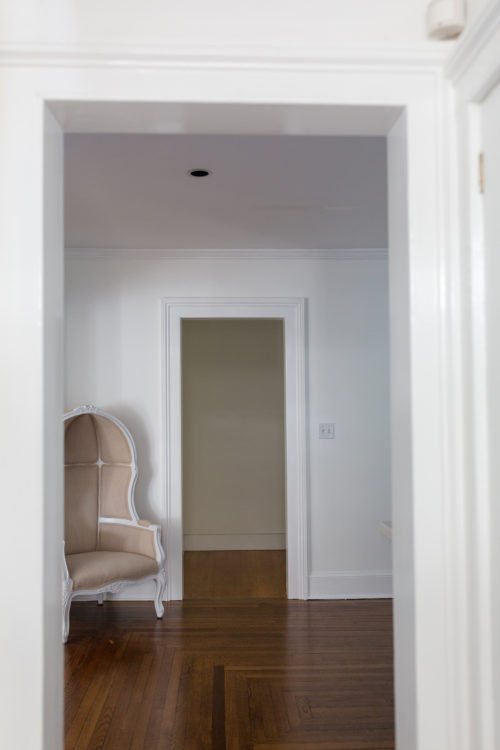 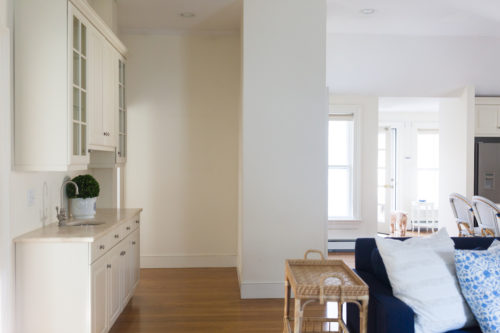 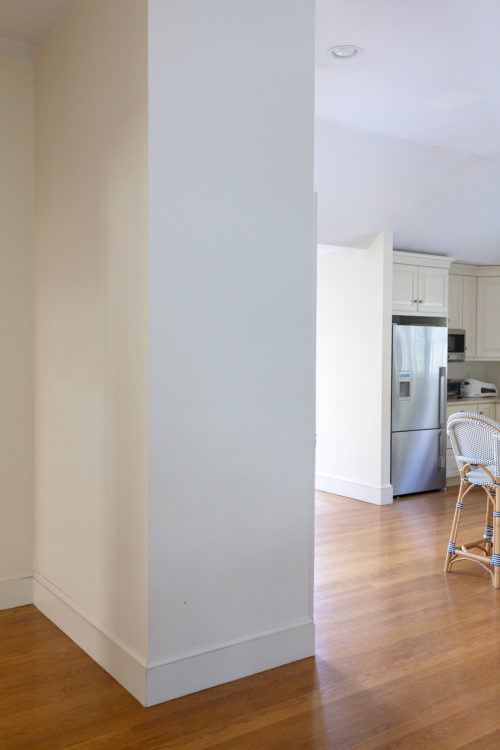 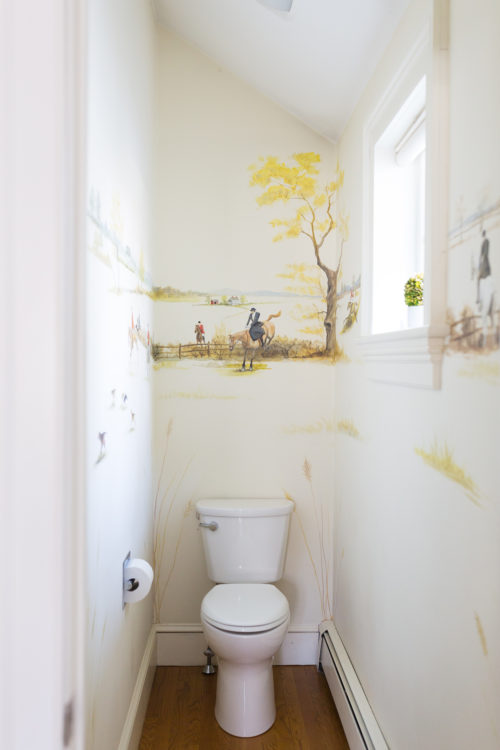 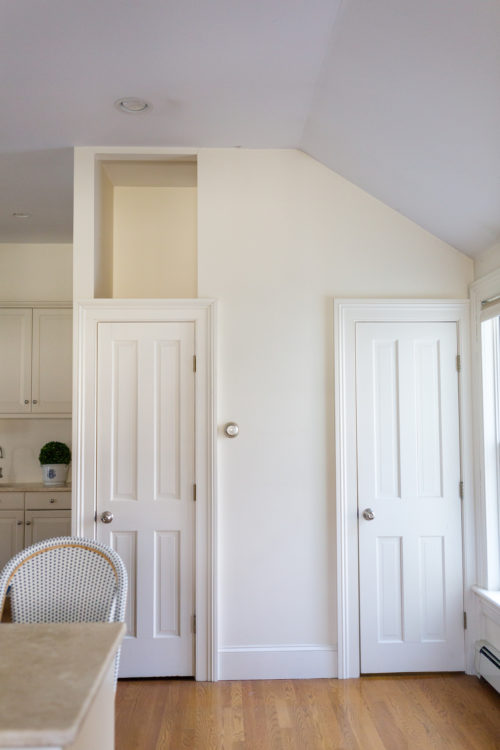 We’re also building a nearly 10’ island that will delineate the kitchen from the family room and be more useable for us than the peninsula in the current kitchen (where the future breakfast nook will be). We currently have a broken dishwasher (it broke the week after we moved in and is so old we couldn’t order parts to repair it), an electric stove, and a fridge that’s on the smaller side, so we’re very eager to upgrade the appliances (especially as my parents are moving in and can hopefully teach us a thing or two in the kitchen!). A new powder room will be built in the hallway behind the kitchen where we currently have a hall closet, and opposite that we’ll build a walk-in pantry that will give us much-needed storage in this part of the house. The existing back door in the hallway will move off-center so the powder room is off to the left and the pantry will be off to the right. The existing family room won’t change much, save for two windows that we’re recycling from our existing sunroom (see below) and putting along the back wall of the house (where the built-in bookcase is now) to get more light in this space. 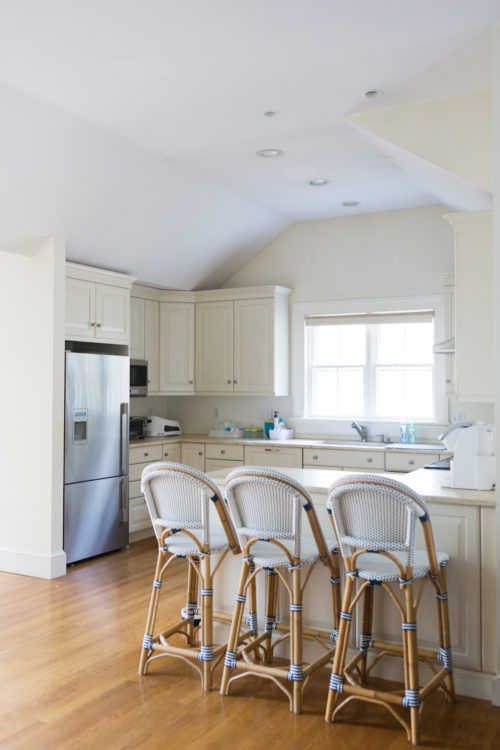 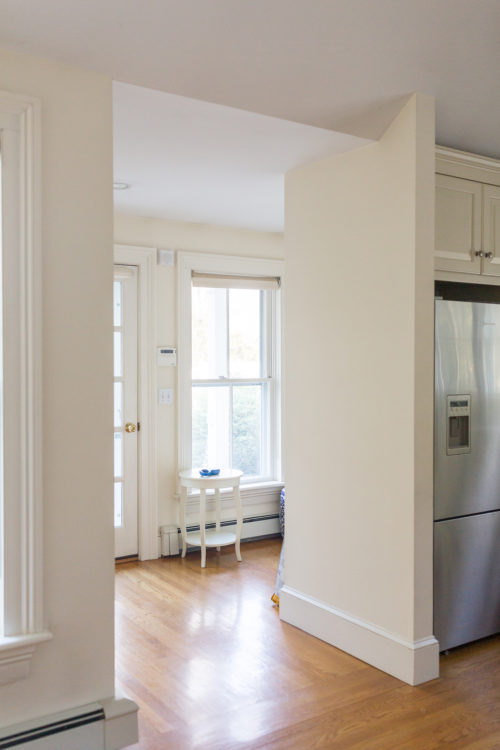 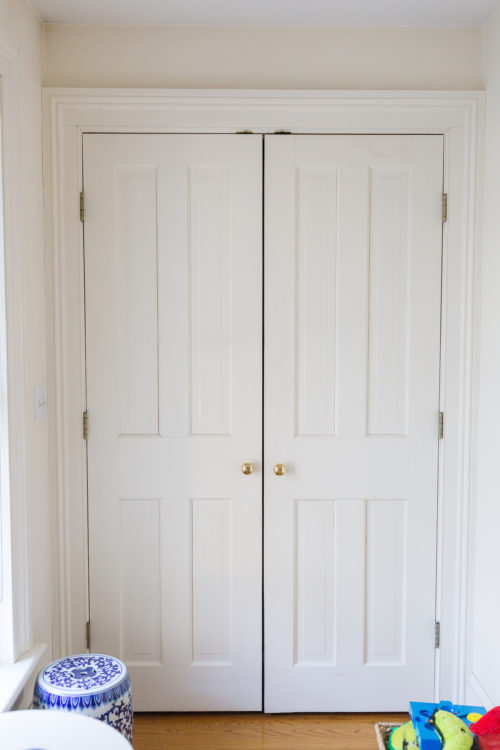 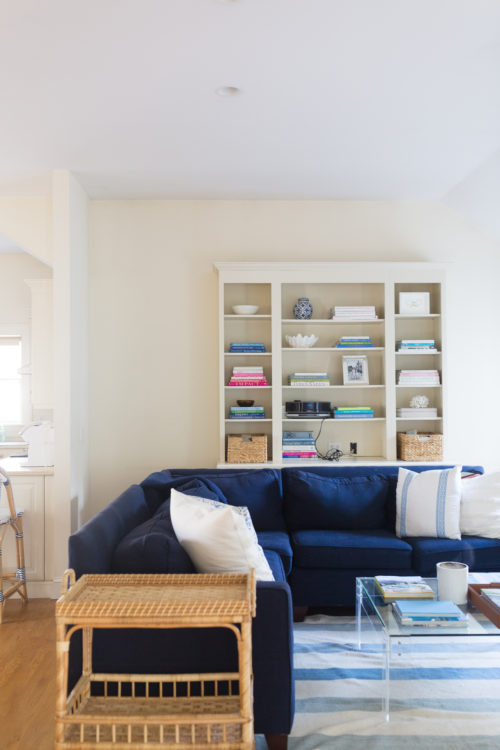 The second project (which starts today!) is to build out the unfinished loft-like space above our garage to create a bedroom and full bath where my parents will be moving in. We fell in love with the raw potential of this space when we first looked at the house and I’m so excited to see it come to life with framing, sheetrock, flooring, paint, etc. The vaulted ceiling will remain but we’re adding a full bath at the top of the stairs, a dormered roof on the back side of the house to give them more useable space, and a couple closets along the front of the house. We also have to rebuild the stairs and add a wall to separate it from the garage. It still won’t be a large space but what it lacks in square footage I hope it will more than make up for in light and charm! 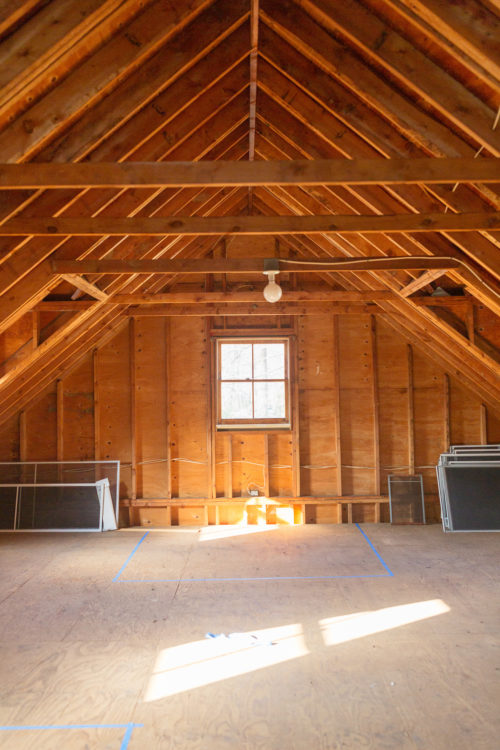 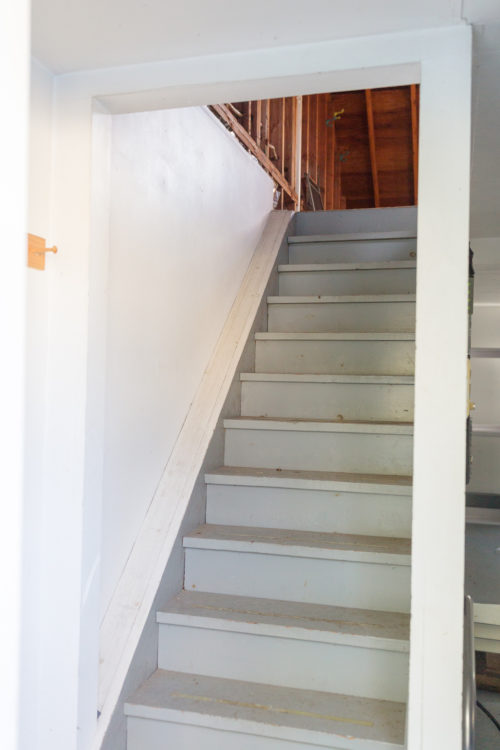 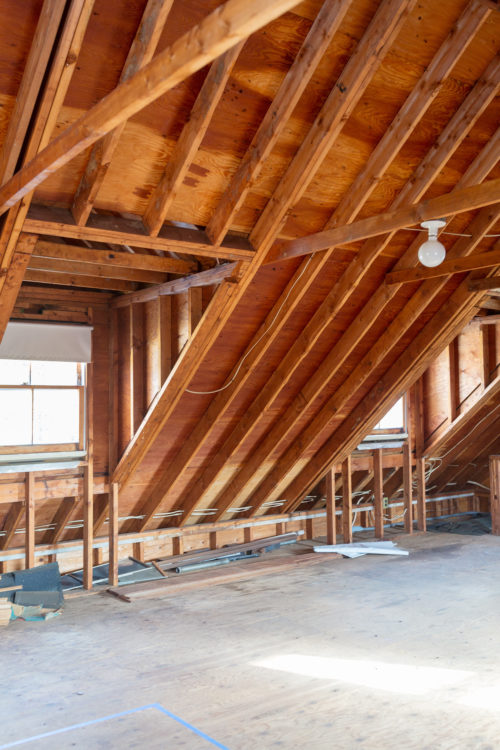 The third project (which also starts this week!) is to build a mudroom that connects our currently detached garage to the first floor of our home, through the existing sunroom (likely to be used as a playroom in the coming years) which already needed repairs to the walls and new flooring. We are desperate for closet and storage space on the first floor as our front door opens into a very narrow foyer (really a hallway) with a small coat closet. The mudroom will give us a new front door that will become our primary entrance to the house as well as closets big enough for off-season outerwear and accessories, hockey bags (currently my brother Camden’s, hopefully Teddy’s in the future!), and the stroller. We really didn’t have a plan for a mudroom when we moved into the house and it’s already clear with just one baby how much we’ll benefit from having a dedicated space for kids to hang their coats and drop their backpacks. We have to order windows for the front of the house to match what’s already there, but the windows on the back wall of the mudroom will be recycled from the existing kitchen — I was blown away by how expensive windows can be so we’re reusing as many as we possibly can! 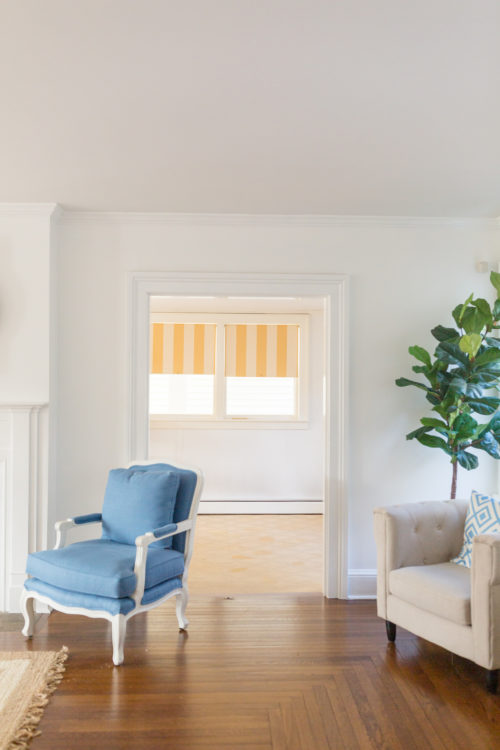 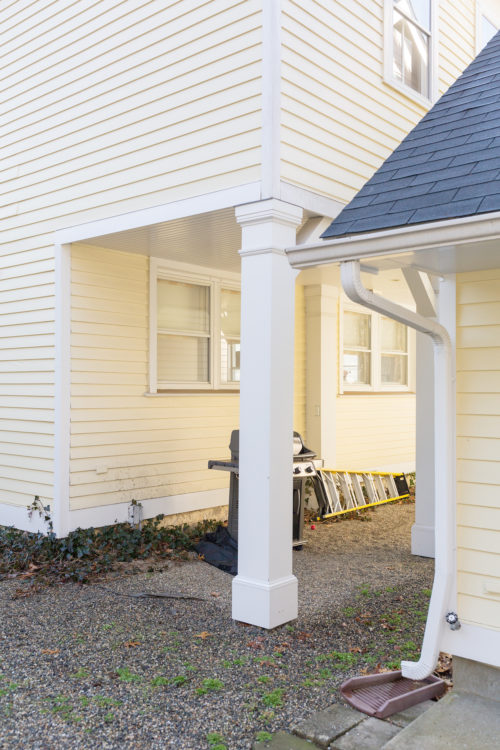 The hope is for all three of these spaces (kitchen, space above garage, and connecting mudroom) to take shape over the next 3-4 months and then we’ll “move in” to those areas and start decorating. I say “move in” in quotes because Will, Teddy, my brother Camden, and I will all be living here while construction is underway which I’m sure will be even more chaotic than I can fathom at the moment. We’re supposed to be completely sans kitchen for closer to six weeks of that timeline which I think will be the hardest part, but I know it will be one million times worth it to have a beautiful and functional new kitchen, create a space for my parents to live, and build a connecting space that gives us more storage. We already look back at our first round of house projects (which we tackled while I was eight and nine months pregnant!) and are so happy we moved the wall in our bedroom and got so much painting done right when we moved in. We want to enjoy this home for as many years as we possibly can and I know this renovation will drastically improve both the value of the house and our quality of life living here. This is our first huge renovation project (there will be hopefully be several more in the years to come!) and I’m so excited to document the process and learn along the way. Here we go!!!

20 thoughts on “BEFORE PICTURES + OUR SECOND ROUND OF HOUSE PROJECTS”