Thank you for all your kind words on the first part of this interview with my mom! I’m so happy to share more about her with all of you. She’s kind of a badass, isn’t she? Today’s questions focus more on her personal life as a mom of four. Here we go! 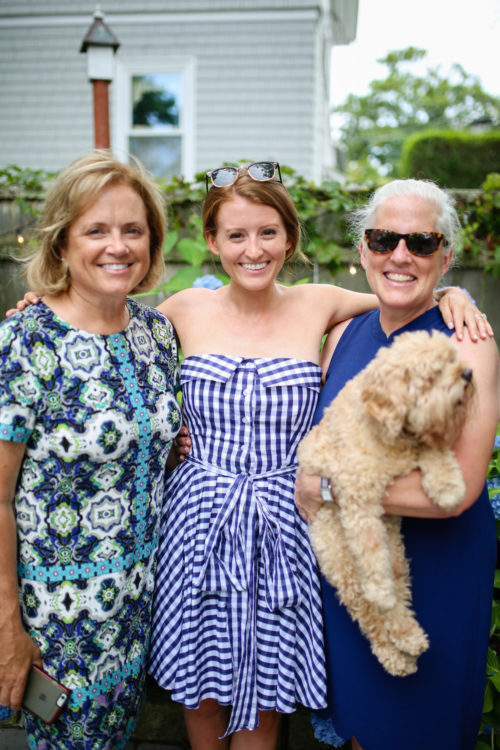 How did you and Dad meet?

A college friend of mine named Marie was a childhood friend of Dad’s family and we first crossed paths when Marie and I were hosting a party at our apartment in New York and Peter came as a guest.

When did you know he was the one?

It took me a while [laughs]. I wasn’t sure he was the one and I broke up with him in 1983 or 1984. He showed up at my apartment with two antique sawhorses and dropped one off, saying that it was a gift that works fine on its own but works better as a pair and that he hoped they’d find their way back together again. We were back together a couple months later, engaged in 1985, and married in 1986. 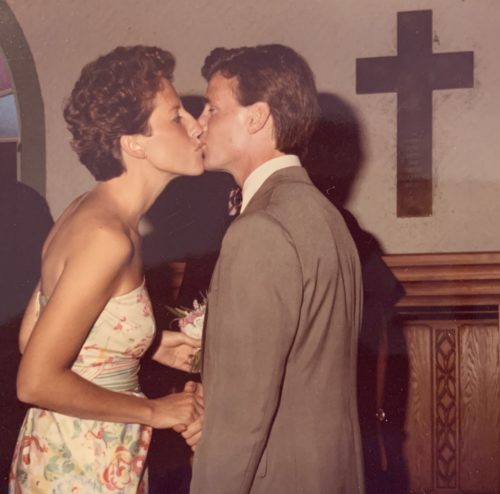 my parents the night before their wedding, 1986

Did you always know you wanted a big family?

I did. I’m one of three and Dad is one of five. Grandy kept a very orderly house [laughs] and I loved going to friends’ houses that were chaotic and fun with kids running amok.

When did you know you were ready to start a family?

We’d been married two years and had just finished renovating a Victorian house that had been neglected for many years. It just seemed like our home was ready to receive a little addition! 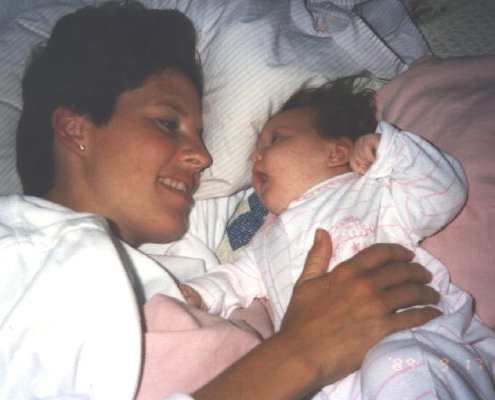 Was it hard for you to go back to work as a new mom? Any words of wisdom for women navigating that transition?

It was definitely difficult. I knew that I would always work outside the home but I never felt ready to go back to work after any of my maternity leaves. The only way I could go back was knowing we had a solid childcare solution in place. We were fortunate that we could afford a live-in nanny who would become part of our family for many years.

Did you struggle at all with hiring a nanny? You know that’s something I’m wrestling with right now.

You do believe as a mother that no one knows your child as well as you do, and it’s hard to delegate care of your most prized possessions to a new person. But you learn to establish which things are most important to you and where you want to model consistent behavior between yourselves and your nanny. I was mostly home for bedtime reading and would plan around school recitals and sporting events, but I knew I didn’t have the patience to be a full-time mom 24/7. 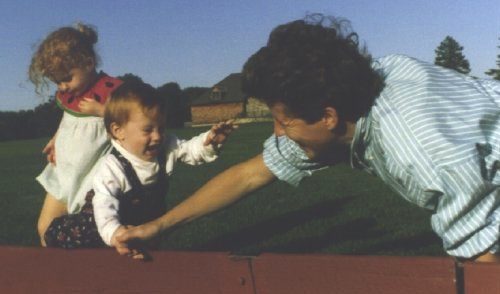 1-2. You and Reilly are 26 months apart so you were both in diapers and you couldn’t totally express yourself yet. We spaced Reilly and Grayson and Grayson and Camden closer to three years apart and that made a world of difference. 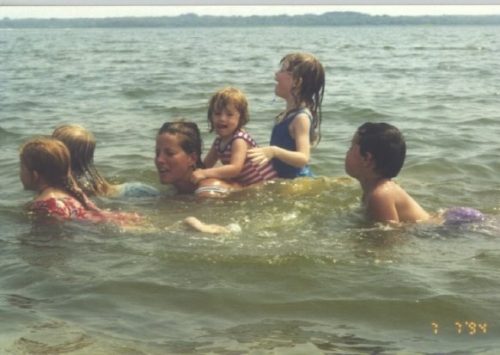 my mom, kids, and cousins at Sesachacha on Nantucket, 1994

How would you describe each of us as kids?

You were thoughtful, a leader, always organizing activities for your siblings to play. Maybe a leader with slightly bossy tendencies [laughs]. You always wanted to know the rules so you could follow them. Reilly wanted to know the rules so she could break every last one of them [laughs]. She’s always been very funny and fun-loving, a master at organizing obstacle courses for the entire neighborhood to play and the first to grab the vacuum cleaner if I was stressed before having people over. Grayson was an easygoing child, very sweet, and really looked up to both of you. He played hard, climbed on everything, definitely our first child to break a bone. Camden was the most easygoing and probably still is. He was quiet but not shy and a willing participant in whatever you guys were up to. He got dragged to a lot of gymnastics meets and hockey games and was just always a good sport waiting his turn. 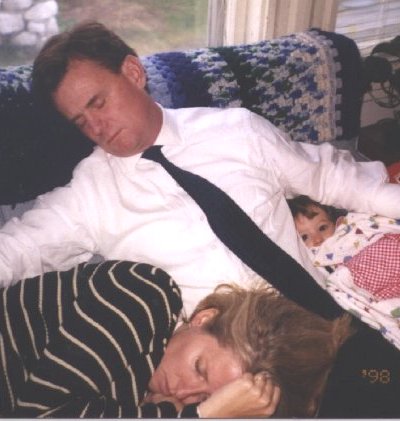 my parents with my youngest brother Camden, 1998

You and Dad have always made such a strong team. Were you always that way? Any advice for newly married couples or new parents?

We both felt a responsibility in raising you guys — it didn’t fall on just one person. As I grew to have the more demanding commute and work travel schedule, Dad supported all of us by working closer to home and being the person to relieve the nanny at night and coach all your sports teams. If you can decide to collaborate rather than compete, with acknowledgement of each of your contributions, you’ll be much more compatible.

I’ve been asked a lot about our family traditions. Did you create those intentionally or did they just sort of unfold organically?

I was heavily inspired by The Seven Habits of Highly Effective Families by Steven Covey. He writes that exceptional families don’t just happen and that really stuck with me. You have to define goals and desired outcomes so that inspired some intentional planning on our parts. Something that was important to us was that when Dad and I were home, we were 100% devoted to you guys, not trying to straddle work and family life. Family dinners around the same table were important — they didn’t happen every night but we tried to do it more often than not, especially on weekends. Most of our socializing with a young family included our kids — we didn’t have a huge social life outside of you guys and we became friends with your friends’ parents. 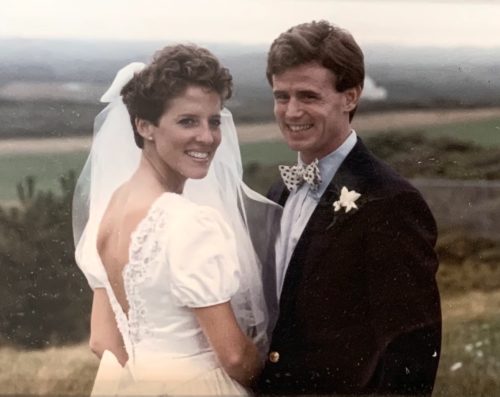 my parents on their wedding day, 1986

When we were little I remember you would give us “a penny a page” — one cent for every page of whatever book we wanted to read for an hour each day. It was such a genius parenting move — the entire summer of quiet hours would cost you like $20 for all four kids. Who came up with that?

Then when we were a little older you started giving us ten cents a lap at our swim club.

Also me. Otherwise you’d be nagging us for snacks or constant entertainment.

At some point we developed a family goal to see all 50 states. Each state only counted if all six of us were there together, and I think we got to about 37. Did you ever feel crazy packing four kids into a minivan and setting off on a road trip to cross off four or five states?

Definitely. As the years progressed, you guys got more involved in helping to plan, so that made it a little easier. And we didn’t drive to all destinations — some we flew to and then piled into a rental car to drive from there. But generally speaking, yes, it was madness. Someone always had to go to the bathroom, someone else left something at the hotel, two of you wanted to watch a movie that the other two didn’t. We had a TV that we bungee corded and plugged into the cigarette lighter before all minivans came with a built-in TV. Dad and I would look at each other and say “we’re never doing this again” just about every trip, and then a few months would go by and we’d planning the next one. 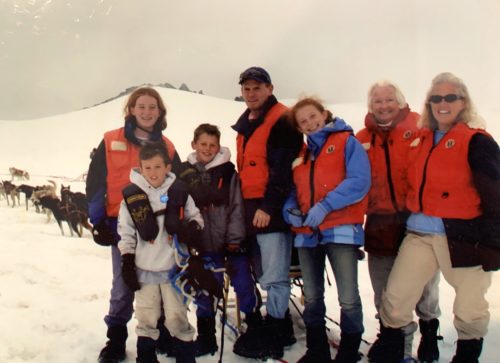 What have been some of your most challenging periods as parents? I know I was a real joy to be around as a teenager.

Every Thursday when our local paper came out, I would pray that I wouldn’t see any of your names in the police blotter [laughs].

It is! We got through the high school years, but there may have been a few mishaps in college. We were probably spared a lot of today’s challenges because smartphones weren’t prevalent until you were all in college. 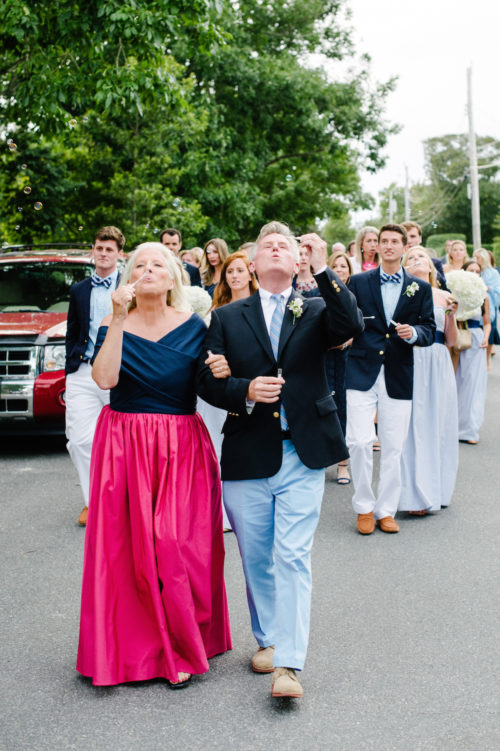 Moving on. Four kids, a career in fashion followed by a career in nursing, your work at ABC… I feel like you take on more than most people half your age. Is there a secret to how much energy you have?

I get that from my mom. I have a very can do attitude and truly believe anything is possible. I like to think having that optimism is a strength, but at times it can cause me to say yes to too many things. I drank the koolaid going to an all women’s college in the late 1970s where we were told we could have a family, have a career, really have it all in a way that most of our mothers couldn’t.

One of the things I love about you is that you make up your mind quickly and don’t waste a lot of time stressing about what other people will think. I wish I were more like that! Have you always been that way?

I think the more you love your own choices, the less you need others to love them too, but some of that’s probably come with age. I guess we just did what we thought was best for our family and didn’t stop to think about whether we were gaining other people’s approval, but that’s harder in the age of social media. 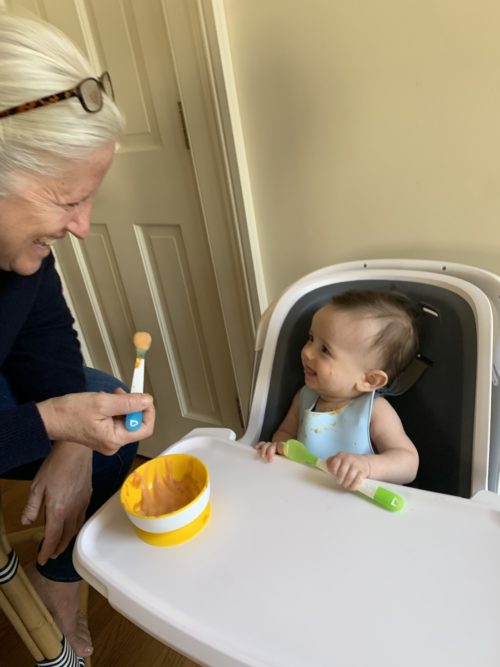 Teddy and his Mimi

It’s been fun to watch you become a grandmother although I know you and Grandy both don’t like that word because it sounds too old. What’s the best thing about being Teddy’s Mimi?

Right now it’s slowing down and getting to see the world through his eyes. Everything is new to him and it makes you stop and appreciate a roaring fire or the sound of chirping birds.

Yesterday was your 62nd birthday. What’s one thing you’re looking forward to about getting older?

Seeing our children find their life partners, welcoming more grandchildren if we’re fortunate, and having more time to do things I love like gardening, reading, and traveling! I love that Grandy taught you how to needlepoint and I look forward to figuring out what gift I can pass on to your children someday.

22 thoughts on “AN INTERVIEW WITH MY MOM, PART TWO”