Thank you all from the bottom of my heart for your excitement over baby #2! We are over the moon about giving Teddy a sibling and excited to relive the newborn days with a new little one. I’m extra grateful that this first trimester was so different from my first trimester with Teddy — I wish I could give the gift of a hyperemesis-free pregnancy to every new mom! Here’s a recap of how I’ve been feeling so far as well as what I’m most excited for in this new chapter! 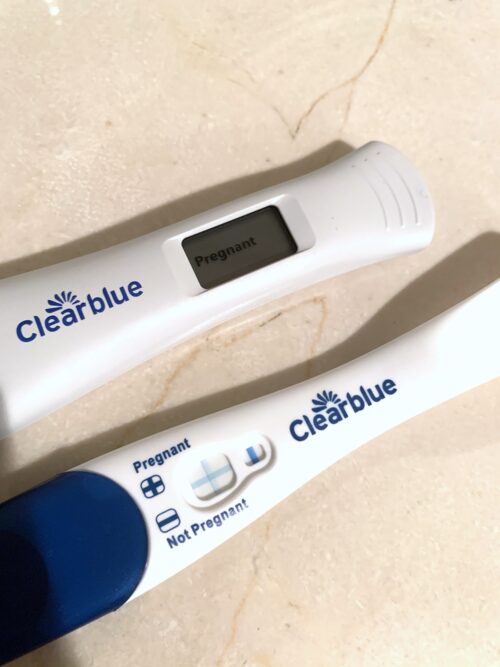 HOW WE FOUND OUT: We got pregnant in our fourth month of trying, which was two months longer than it took to get pregnant with Teddy (and of course still relatively quickly — I never want to be insensitive to people who have had a much more difficult path to parenthood). After a few months of negative pregnancy tests, I was trying hard not to get my hopes up and took a test at home when we got back from Nantucket in mid-August. Since I’d taken a positive test with Teddy while Will was at work (oops!) and waited for him to get home that night to share the news, it was fun to find out together this time around. I told Will it would be a few minutes before the test showed results and had started getting ready for bed when he yelled, “Pregnant!” I couldn’t believe how fast it showed a positive result — we were both in a happy state of shock that lasted the next few days!

OUR FIRST APPOINTMENT: The waiting game between the positive pregnancy test in mid-August and our first OBGYN appointment in mid-September felt like a lifetime. I switched to a new practice after my delivery with Teddy and everyone there is incredible (if you’re local and want their information, send me an email!). The first appointment confirmed I was about seven weeks along and put our due date at the end of April. (We have a ton of late April and early May birthdays in our family — my mom on April 21, Will’s mom on April 28, Will on May 3, my dad on May 5, and my brother Grayson on May 6 — so it will be fun to see where this little one’s birthday falls!) Nothing will ever compare to hearing our babies’ heartbeats for the first time — I get chills just thinking about it. Pure magic! 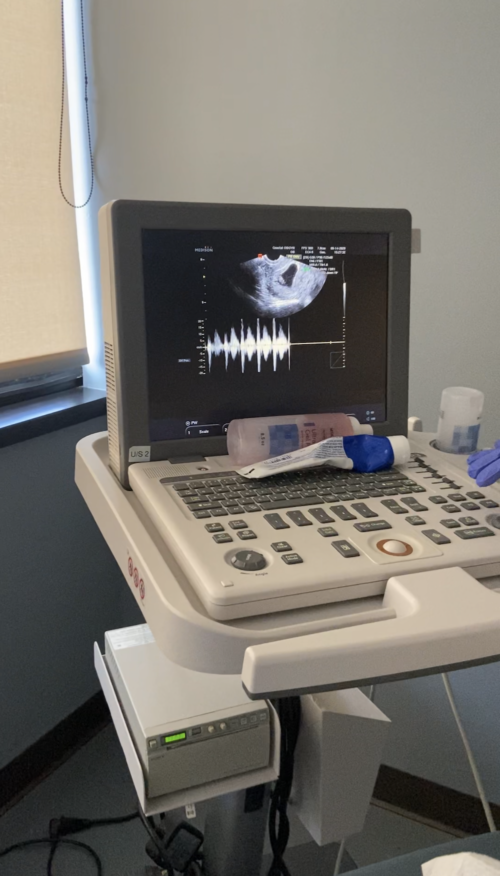 SYMPTOMS: I started feeling absolutely exhausted around week six, which lasted right through the end of the first trimester at fourteen weeks. (Hence the lack of cute photos in this post… It was a lot of daytime pajamas and dry toast over here.) Will was truly superhuman during this time, taking Teddy most mornings so I could sleep in and making me breakfast every day for three months straight. I threw up for the first time at eight weeks and instantly convinced myself that this would be my second pregnancy with hyperemesis, which had set in around nine weeks with Teddy and lasted until the day I gave birth. And while I felt nauseous on and off and threw up a total of twelve times these first few months, the truly extreme nausea and vomiting I’d experienced with Teddy (sometimes more than five times a day, accompanied by losing eight pounds in my first trimester before I went on medication) never came. I didn’t always feel amazing — I was definitely able to take it easier during my first pregnancy when I didn’t already have a one-year-old tearing through the house — but it’s been night and day to experience pregnancy without debilitating nausea and vomiting. I know hyperemesis could rear its ugly head again in future pregnancies, but I’d love to be able to give some hope to other moms who have experienced hyperemesis in past pregnancies that it’s not a given going forward.

FINDING OUT THE BABY’S SEX: We were able to find out the baby’s sex through genetic testing between 10 and 11 weeks and let’s just say it was the opposite of what I was expecting, in the best way possible! I can’t wait to share the news with you later this week. I’m truly in awe of parents who wait until their baby’s birthday to find out but I love using the baby’s pronouns and trying on possible names instead of saying “it” all the time. To each her own! 🙂 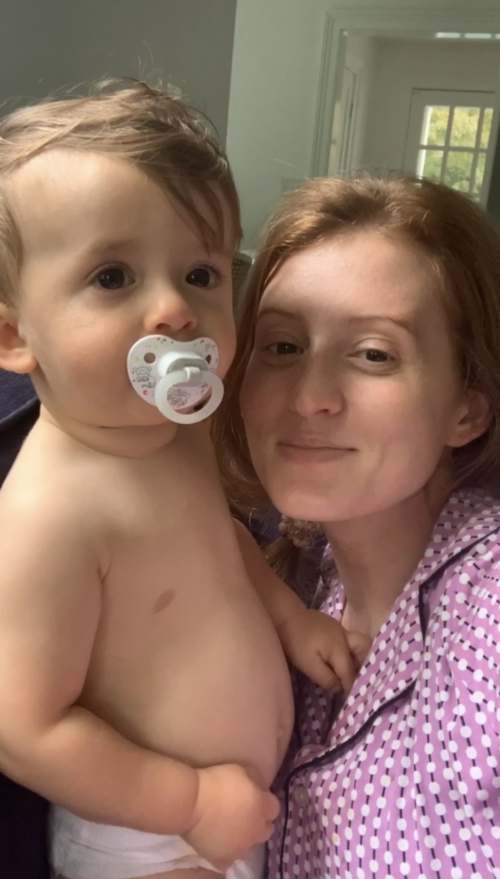 BREASTFEEDING WHILE PREGNANT: There’s a chance I’ll write more about this at some point, but I was still breastfeeding Teddy four times a day when I got pregnant with baby #2. This was never a goal I had in mind by any means — it just kind of happened and I didn’t feel a need to stop until Teddy was ready. By Teddy’s first birthday, when I was about nine weeks pregnant, he was down to breastfeeding either once or twice a day, as he’d gotten gradually less interested in sitting still and more interested in eating whatever food we were eating at mealtimes. Then suddenly, five days after his birthday and right at ten weeks pregnant for me, I went in to feed him like I did every morning at 6 a.m. — and he looked right at me and vigorously and repeatedly shook his head “no.” It was truly the most clearly he’s ever expressed any preference and I can’t entirely explain it, but I knew right then and there that he was ready to move on. He never attempted to breastfeed again — simply put, that was that. Even though I’d been breastfeeding less and less over the previous two months, the transition from “some” to “none” came on swiftly, suddenly, and honestly quite sadly. I felt wistful for a few days, wondering if getting pregnant had accelerated his timeline for moving on but trying to muster up gratitude that it had been his decision to stop and not something I’d had to decide or enforce. Unfortunately, after about a week of zero breastfeeding, I went from feeling wistful to feeling downright depressed. Again I may or may not want to share more about this at some point, but I’ll at least mention it here if it might make any mom feel a little less crazy or alone: post-weaning depression is real and it was a really dark time for me. There were days I didn’t want to get out of bed, times I couldn’t stop crying even when I couldn’t identify why I was in the first place, and weeks where I felt so unlike myself I wondered if I’d ever feel normal again. It took a little over a month for my hormones to regulate and for me to feel more like my old self, but I found very few resources on post-weaning depression, particularly for women who were also pregnant, so I wanted to share the hard stuff as well as happy news about making it through to the other side. If you’re experiencing anything similar, I’d encourage you to confide in your partner and reach out to your doctor, and you’re welcome to reach out to me over email if you need to know you’re not alone. I don’t mean for this to take away at all from the joy we have over welcoming a new baby, but it’s an uncomfortable part of the past few months and I really push myself to keep it real when I think it might help even one person reading.

WHAT I’M MOST EXCITED ABOUT: One thing I feel really grateful for in this second pregnancy is the gift of perspective. I have a much better understanding this time around of how temporary everything is — the fatigue and nausea, the aches and pains, the labor and delivery, the postpartum recovery. Everything — even the worst physical pain and the most emotional lows — is a phase, and I couldn’t fully appreciate that when every single thing was a novel experience. I’m thrilled to be at a new OBGYN practice with doctors who rotate being on-call so I hopefully avoid a repeat of my doctor going out of town before my due date and a real jerk delivering our baby. I’m excited to have another chance at giving birth — to try to go into it feeling stronger mentally and physically, to have a better idea of what to expect, and to know that the pain during and after is so fleeting and that the love on the other side is so one trillion times worth it. I can’t wait to give Teddy the gift of a younger sibling — being the oldest of four has been one of the greatest joys of my life and I’m giddy at the thought of him experiencing the same. I can’t wait to see Will with another newborn — his bond with Teddy is better than anything I could have imagined and he will be the most incredible dad to two. I know there will be new challenges, new surprises, new heartaches, but I also know there will be twice the joy and twice the love and I feel so overwhelmingly thankful to experience and share it all. 💙

35 thoughts on “MY FIRST TRIMESTER RECAP”