I can’t believe I’m already sitting down to share Peter’s birth story with him snuggled up next to me as I write! His due date wasn’t until April 28 but he surprised us with an early arrival just after 37 weeks on Friday, April 9. I had Teddy just two days before his due date so I assumed we still had at least another week or two to go, but clearly this little guy had his own schedule and was ready to make his presence known. I went to my 37 week appointment and was surprised to learn I was already 3 cm dilated since I’d been admitted to the hospital with Teddy when I was only 2 cm. It was a little bit of a heads up that this baby was coming early, but I had no idea he’d be in my arms less than 48 hours later!

I’d been planning to write a full post about this before giving birth, but I went into this delivery feeling genuinely excited about having a sort of “do-over” for my experience giving birth to Teddy. I was determined to leave the delivery room feeling strong and proud and not like I’d somehow been a disappointment, and I spent a lot of time and energy in the eighteen months between their births trying to get in the best possible headspace to do it all again. I talked to a therapist to process feelings of shame and disappointment around Teddy’s birth, had conversations with Will and the doctors at my new OBGYN practice asking them to communicate openly throughout the delivery (to avoid the surprise factor of finding out I’d had an episiotomy after the fact with Teddy), and tried to stay as active as possible during my pregnancy for both my physical and mental well-being. I think there’s a powerful mind-body connection in labor and delivery that I didn’t fully appreciate before giving birth to Teddy and I’m glad I spent some time envisioning what a more favorable experience might look like with Peter. Of course there’s always an element of the unknown when it comes to giving birth and my second delivery experience could just be pure luck, but I at least wanted to be able to tell myself I’d done everything in my power to manifest a different experience the second time around. My two deliveries were so night and day different from one another and I wish more than anything that I could give that gift to any mom who’s had a challenging previous delivery, whether emotionally or physically. Peter’s birth story was more incredible than I thought possible and I’d love to think that gives a little hope to any expecting moms reading this! 🙏🏼 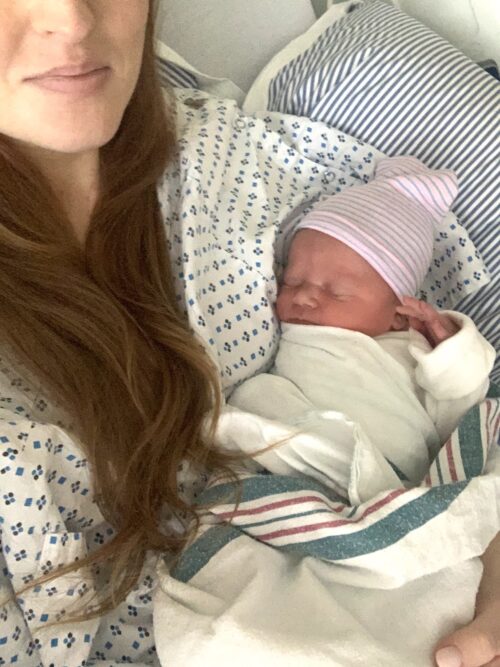 I started having intense contractions around 8 p.m. the night of Thursday, April 8, but similar to my third trimester with Teddy, I’d been experiencing prodromal labor (real contractions that stop short of progressing to dilation and active labor) for a little over a week, so I wanted to give it as much time as I could at home before heading to the hospital in case it was a false alarm. But by 1 a.m., I had showered, spent an hour on the exercise ball, started timing contractions, and become pretty convinced that this could be the real deal. I woke Will up so he could throw some things in a bag, rounded up a few last-minute additions to my hospital bag for me and Peter, and had a tearful goodbye picking Teddy up out of his crib, knowing it was the last time I’d hold him as an only child. Will set up the carseat while I let my parents know we were heading to the hospital and then off we went!

We got to the hospital around 1:30 a.m. and I was a little bummed to learn I was only 3.5 cm dilated, but my contractions were strong and close together enough that they admitted us and got us situated in a delivery room. Even though I told myself after Teddy’s birth that I’d get an epidural earlier on in the process next time, I found I wanted to be upright and walking around for as long as I could to let gravity help move things along. Still, by 3:15 a.m., I was pretty desperate for pain relief and decided to call for the anesthesiologist. Will was able to rest for a bit while the nurse helped move me from side to side to evenly distribute the epidural and even though I couldn’t fall asleep, I instantly felt so much more relaxed and excited for what was to come. My water broke on its own around 4:00 a.m. and I went from 4.5 cm to 9 cm over the next hour and a half! I really think getting the epidural when I did allowed my body to relax and do its thing without me tensing up at every contraction — huge props to any mom who gives birth without an epidural but I am a big fan! 😂 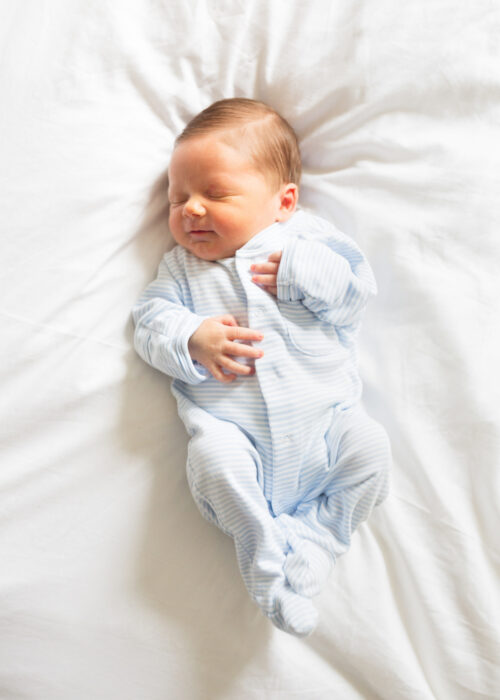 By 6 a.m., my doctor had arrived and it was time to push! I pushed for around an hour before Peter was born at 7:08 a.m. and his delivery was one of the most magical experiences of my life — even better than I’d spent my entire pregnancy envisioning and praying for. Where the on-call doctor who delivered Teddy had been loud and gruff, the doctor who delivered Peter was warm, encouraging, and honestly nothing short of heaven-sent. We made small talk between contractions and she offered constant guidance and reassurance that every push was getting us one step closer to meeting our little one. The moment Peter was placed on my chest, I felt equal parts overjoyed and empowered and I couldn’t have dreamt of a better outcome as someone who left her first delivery feeling so small. I wish I could go back and tell my first-time pregnant self to trust my gut and keep searching for an OBGYN who felt like a better fit, but I’m so deeply thankful to have found that person and practice this time around. I feel like I got the positive birth experience I’ve heard so many other moms rave about, and my emotional and physical recovery has been so much smoother as a result. 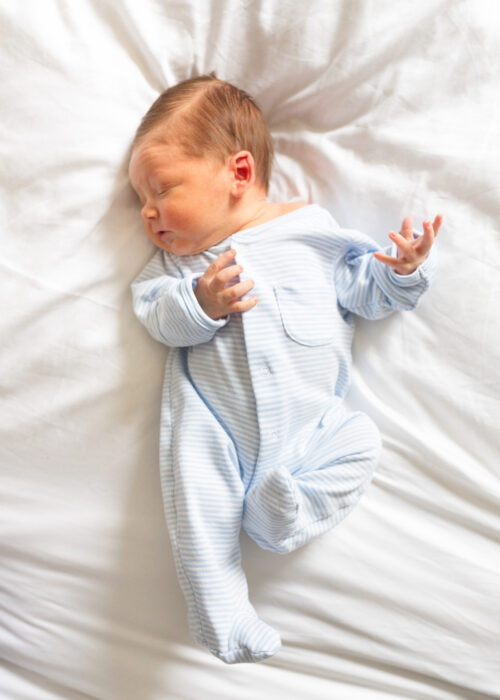 Unfortunately Peter was quickly whisked to the nursery and later to the NICU as he was having trouble regulating his breathing on his own, so our hospital stay was still not without some very trying moments. I’d been able to breastfeed Teddy for the first time while still in the delivery room and then we had both our families popping in and out for two days to meet him, so our first hospital stay felt like it went by in the blink of an eye. With Peter being moved out of our room before I could nurse him and COVID preventing any family or friends from visiting us in the hospital, the hours ticked by much more slowly as Will and I waited desperately for updates from the NICU and I tried not to be sad that I was hooked up to a breast pump instead of nursing Peter in my arms. The maternity nurses tried to reassure us that Peter was going to be okay and that this was fairly routine for babies born before their due dates, but I’ll never forget the sight of our itty bitty newborn baby hooked up to all kinds of tubes and wires and the desperation of wanting to take him back to the maternity floor with us. Thankfully Peter’s breathing steadily improved over the course of two days and nights, but I still look back with incredible longing when I reflect on hearing babies crying in the rooms next door while Will and I sat alone in our room waiting for any new news. I’ve since connected with several moms whose babies spent time in the NICU and I know I’m not alone in those feelings of sadness over not spending those first couple days together and wondering whether there’s anything I could have done differently to achieve a different outcome. We’re incredibly relieved that he was able to come home with us and I have infinite empathy for parents awaiting the same outcome for their own little ones. Getting home, hugging Teddy and my parents, and having Peter cozy and safe in my arms was the greatest relief and I’ve thanked my lucky stars every day since. 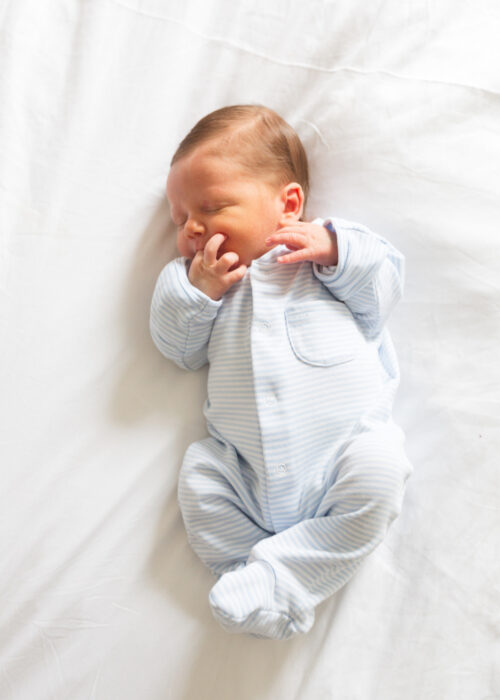 So far Peter has been a pretty easygoing baby (knock on wood!) — he’s sleeping well, slowly but surely getting the hang of breastfeeding, and very tolerant of Teddy patting him on the head or trying to brush his nonexistent teeth. 😝 My postpartum recovery has been a breeze relative to last time — hallelujah for no episiotomy this time around!!! — and I have enormous gratitude for all the doctors and nurses who made Peter’s delivery and homecoming so special. I can’t believe how much I already love this little person who was still in my belly two weeks ago and I feel like I spend half the day just staring at him in grateful disbelief that he’s here and home and healthy. I’m determined to soak up every second of this newborn phase with lazy days in bed, him falling asleep on my chest, and marveling at every little coo and snore. Will has been an absolute godsend running around after Teddy and I’m excited to venture out as a family of four now that the weather is warming up and I’m feeling more like myself. I also can’t wait to see Peter’s personality shine through in the coming weeks and months and watch he and Teddy develop their own bond. I so appreciate each of you following along and wishing us well as we enter this new chapter — two under two, let’s do this! 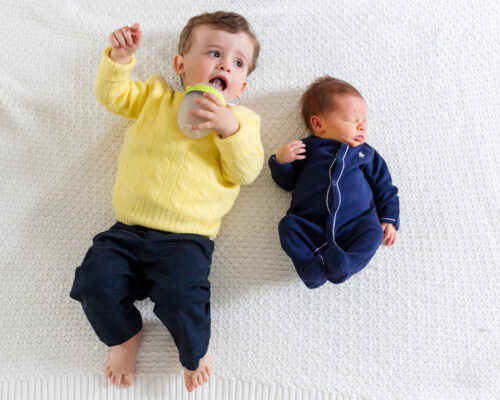 P.S. I still tear up rereading this post about our first month with Teddy. 💙

Pinching myself as I type this… Design Darling x