MY SECOND LIST OF 101 THINGS TO DO IN 1001 DAYS! (SEE MY FIRST LIST HERE.) I’M REALLY PROUD OF EVERYTHING I ACCOMPLISHED THROUGH MY FIRST LIST AND PUBLISHING IT HERE DEFINITELY HELD ME ACCOUNTABLE FOR GETTING THINGS DONE. SO HERE IT GOES: MY SECOND LIST AND ANOTHER 2.75 YEARS TO ACHIEVE AS MANY GOALS AS POSSIBLE. LET’S DO THIS THING! 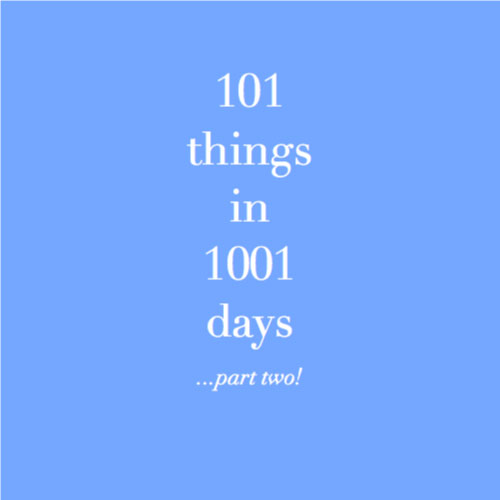 1. Reconnect with French host mom (January 2014).
2. Reconnect with my favorite high school teacher (March 2014).
3. Reconnect with my gymnastics coaches (August 2015).
4. Go one month without ordering takeout (June 2014).
5. Go one month without shopping (January 2014).
6. Go one month without taking a single taxi (June 2014).
7. Volunteer for a cause I’m passionate about (KIPP tutoring, October 2014).
8. Read five biographies.
9. Read five classics (1/5 — Tender is the Night by F. Scott Fitzgerald).
10. Read at least thirty new books total (30/30 — The Year of Magical Thinking by Joan Didion, Zen and the Art of Happiness by Chris Prentiss, The Here and Now by Ann Brashares, #GIRLBOSS by Sophia Amoruso, Not That Kind of Girl by Lena Dunham, The Hunger Games, Catching Fire, and Mockingjay by Suzanne Collins, Yes Please by Amy Poehler, How to be Parisian Wherever You Are by Anne Berest, Audrey Diwan, Caroline de Maigret, and Sophie Mas, Happier at Home by Gretchen Rubin, Going Off Script by Giuliana Rancic, Seriously...I'm Kidding by Ellen Degeneres, 10% Happier by Dan Harris, So Good They Can't Ignore You by Cal Newport, Why Not Me? by Mindy Kaling, Gone Girl by Gillian Flynn, The Girl on the Train by Paula Hawkins, Luckiest Girl Alive by Jessica Knoll, Year of Yes by Shonda Rhimes, How to Have a Good Day by Caroline Webb, Maestra by L.S. Hilton, What She Knew by Gilly Macmillan, Big Magic: Creative Living Beyond Fear by Elizabeth Gilbert, Man Repeller by Leandra Medine, The After Party by Anton DiSclafani, Opening Belle by Maureen Sherry, The Vacationers by Emma Straub, When Breath Becomes Air by Paul Kalanathi, You Are A Badass by Jen Sincero).
11. Start collecting something besides coffee table books (started collecting seashells in September 2015).
12. See three concerts (3/3 — Robert Earl Keen in February 2015, Texas Independence Day in March 2015, Taylor Swift in July 2015).
13. Get a second puppy!
14. Invest my IRA.
15. Be able to do all three splits and my balance beam scale again.
16. Unplug completely for 24 hours (no internet, iPhone, television, etc.) (Saint Martin, December 2014).
17. Learn how to tie a tie.
18. Invest in grown-up luggage (Steamline Luggage, January 2015).
19. Find a Pilates/yoga buddy and make it part of my routine to go often! (Class Pass with Gretchen, summer 2015).
20. Read for thirty minutes every night for one month.
21. Double donations to Bucknell each year.
22. Successfully donate blood.
23. Get a keratin treatment and blog about it (September 2014).
24. Vote in a non-presidential election.
25. Donate to a Kickstarter campaign I believe in (refugee aid in October 2015).

69. Have one room in our house professionally photographed (One Room Challenge, November 2015).

TWEET ME THE LINK AND I'LL ADD YOU BELOW!