I can’t believe I’m 28 weeks into pregnancy! My second trimester absolutely flew by, which was a welcome change after a challenging first trimester. It definitely felt like time stood still for those first three months where I was trying to tell as few people as possible and it’s like the clock started ticking again once I shared the news and started showing. It’s crazy to think we are in the home stretch toward meeting our baby boy. We have so much to do (including moving into a new house!) before his arrival and I have a feeling late September will be here before we know it. Without further ado, my second trimester recap! 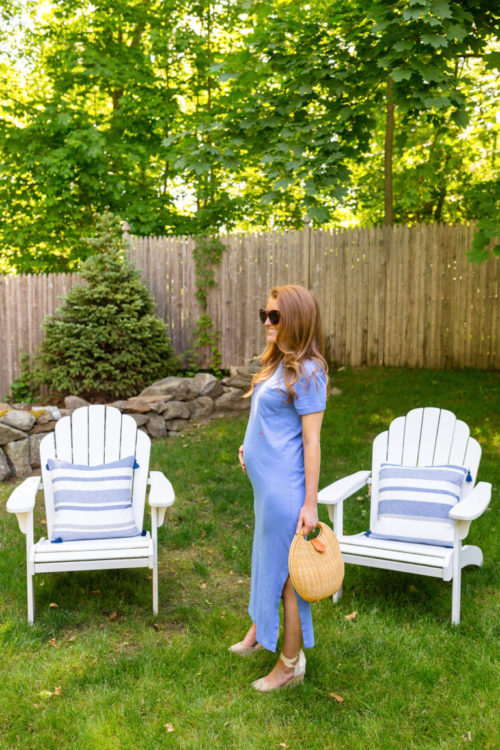 Unfortunately my hyperemesis gravidarum did not let up at the end of the first trimester and I made the decision to stay on Diclegis to keep me from throwing up every day. I’ve connected with several readers who are also contending with hyperemesis and I know this medication doesn’t work for everyone so I’m particularly grateful that it’s been a total game-changer for me ever since I started taking it at 9 weeks. I take it once in the morning and once at night and while it still makes me a little drowsy, it’s more than worth it not to deal with constant nausea and vomiting several times daily. Apologies if this is too much information (particularly for those of you not familiar with this symptom!) but I went from throwing up 150+ times in my first trimester to fewer than ten times in the entire second trimester — it’s truly given me a new lease on life! As I’ve said before hyperemesis is something I wouldn’t wish on my worst enemy and I wish the anti-nausea medications worked as well for everyone as they have for me.

I also got some energy back over the course of the second trimester and found myself needing to nap much less frequently than I had during the first trimester (again probably a perk of not throwing up every few hours!). But there were plenty of other physical and emotional changes these past few months (both good and bad!) that I want to document here since I’ve been so fascinated by following other people’s pregnancies during my own. 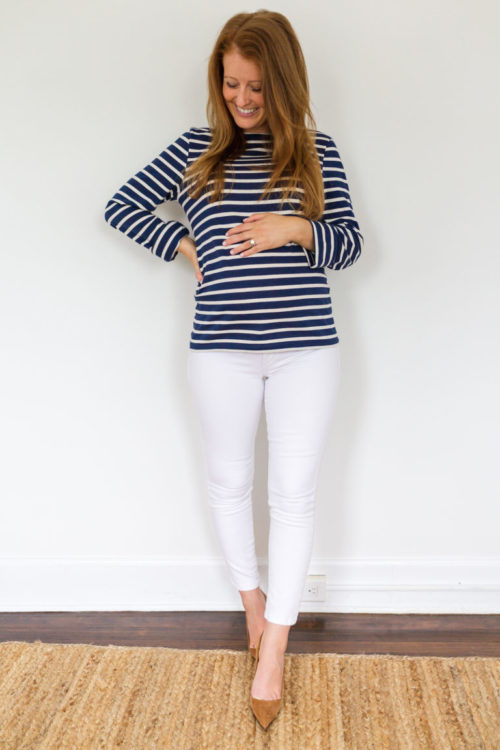 Finding out the sex: We got our genetic testing and gender reveal information back at 14 weeks and it instantly made the entire pregnancy feel more real. Knowing that we’re expecting a baby boy and being able to use “him” instead of “it” made a big difference and got us started on narrowing down our list of names. I even spent a few days calling him by different names to see which one(s) felt right and it’s been so fun to call him by his name ever since we decided on the one!

My bump “popping”: I went from looking like I might have just had a large lunch to looking unmistakably pregnant around 18-19 weeks. Relatedly this is when my search for maternity jeans kicked into high gear!

Feeling the baby kick: This has been my favorite part of pregnancy by far. It started out as an occasional and very faint fluttering feeling at 19 weeks and has since turned into what feel like full-blown dance parties, often right as I’m trying to fall asleep. I will never forget the first time Will could feel the kicks with his hand on my stomach and it felt like the baby was responding to his touch. Feeling those little (and sometimes pretty big!) movements is pure magic and I swear I’m going to miss them once he’s actually here with us!

Kidney stones: After two trips to the emergency room in my first trimester, I was less than thrilled to wind up back there to be treated for a kidney stone. I’d last had kidney stones at age 14 and immediately recognized the sharp side pain at 19 weeks. Thankfully they pumped me full of fluids and I was able to pass it without surgical intervention (which I’d needed at 14) but as anyone who’s ever had a kidney stone will tell you, iif I never have one again, it will be too soon!

Anatomy scan: The 20-week anatomy scan gave us our closest look to date at our baby boy and sometimes I stare at the printouts trying to look for signs that he looks like Will or me. Mostly he was wiggling around so much that it was hard to get a perfectly clear photo, but it was such a relief to know that he’s healthy and growing and swimming around quite contentedly in there!

Infant care class: We took our first class at the hospital at 22 weeks and I think this two-hour class at least gave us a good understanding of how much we still have to learn. We definitely need some more practice swaddling, but thankfully the hard copy of The Happiest Baby on the Block has super helpful illustrations that break it down step-by-step. I found it a little funny that our hospital offers six hours of instruction on labor and delivery (which should last no more than 48 hours) vs. two hours on infant care (which tried to cover baby’s first several months) so we’re planning to go back for an infant CPR class in September in the hopes that will cover more ground.

Childbirth preparation class: We took the first three-hour installment of our childbirth preparation class at 23 weeks and are going back for the second three-hour installment in August to take a tour of the maternity ward and pre-register at the hospital. The first half was extremely educational and I benefitted a lot from hearing other moms-to-be’s questions, so I’m excited for part two! I highly recommend taking a similar class if you’re feeling anxious about labor (and I mean, who isn’t?!).

Our first baby shower: Will’s mom’s best friend threw us an absolutely gorgeous baby shower in Dallas when I was 23 weeks and it was so fun to celebrate our growing family with all our friends there! They made a very generous dent in our baby registry and it’s kept me from doing much more shopping for baby until after my cousin and best friend throw us a second baby shower in Connecticut next month.

Glucose screening: I took the one-hour glucose screening at 26 weeks and couldn’t believe how many people on Instagram shared that it was their least favorite day of pregnancy. The sugary drink was pretty gross but I think because I’d taken Diclegis before drinking it, I wasn’t as nauseous as I might otherwise have been and I managed to keep it down long enough to get my blood drawn. One thing that my OB-GYN’s office did that apparently not all doctors offer is that I could drink the beverage at home 45 minutes before my appointment and then have my blood drawn 15 minutes into my appointment time, so I didn’t have to wait at her office for the full hour. It might be worth asking if you can get the first appointment of the day and do the same! I was shocked and supremely grateful to hear that I passed on the first time around, particularly as my mom had gestational diabetes with all four of her pregnancies. I swear the only thing I’ve craved while pregnant is sugar, sugar, and more sugar and my self-control has been at an all-time low, so I know it’s something I need to continue to pay attention to even though I passed the screening.

Baby books: I’ve read four of the five books I want to read before my due date (you can see which ones in this post) and Will and I have continued to make progress on this goal since getting to Nantucket last week. I’ve also been getting in the ocean nearly every day because it feels so nice to move around a little without pressure on my joints and I’m determined to make sure that our baby loves being in the water as much as I do!

Weight gain: We don’t have a scale at our house on Nantucket and I have to say it’s kind of nice! I believe I’ve gained around 22 pounds from my pre-pregnancy weight and while I’d love to stay in the recommended 25-35 pound target range, I’m really doing my best not to stress about it. I have days where I feel fit and strong and others where I feel like my stomach can’t possibly get any bigger, but I know the baby I’m growing is infinitely more important than seeing a certain number on the scale and it will be good for me mentally and physically to get into a regular workout routine a couple months after my due date.

12 thoughts on “MY SECOND TRIMESTER RECAP”