Hello from the other siiide! Yesterday marked four months since Teddy’s birthday and I have to say it feels like a milestone worth celebrating after the month we’ve had! I feel like we lost half the month between me and Will battling the flu and taking turns solo parenting to keep Teddy from getting sick. We are finally feeling healthy again and eager to get back into more of a routine. We’re also going through a major sleep regression right now but every day he wakes up with a smile on his face and I feel like the luckiest person in the world to get to be his mom. You can catch up on his birth story, my postpartum recovery, and his one month, two month, and three month updates here! 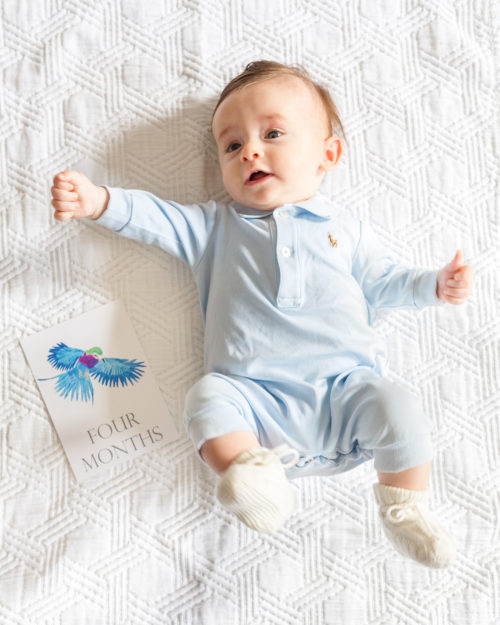 I feel like I say this every month, but it’s amazing how fast he’s grown and how much he’s learned since my three month update. He has very little interest in sitting still and wants to be propped up in a standing position for literally hours on end, jumping and squealing and putting on a show. He much prefers being upright and taking in his surroundings to being on his tummy right now, but I still try to squeeze in a few minutes on his playmat each day so he can strengthen the muscles he’ll need to crawl in a few months. He LOVES music and could stare at this music cube and this light bar for hours. We also recently introduced this jumpscape and he loves bouncing up and down and playing with all the colorful attachments. It even has a jump counter (like a Fitbit for babies!) which cracks me up. 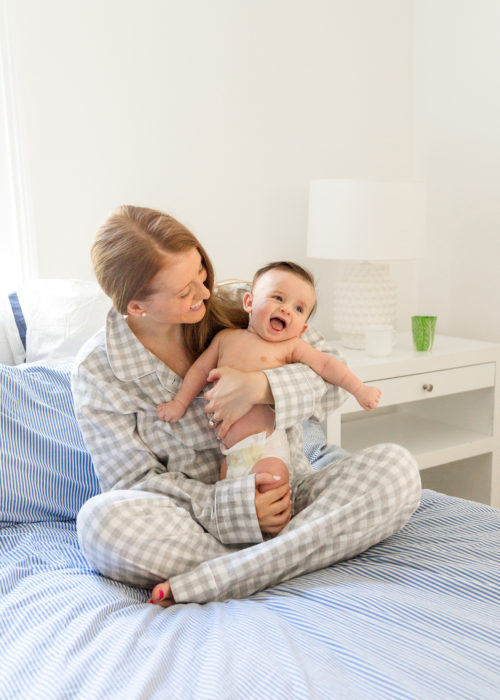 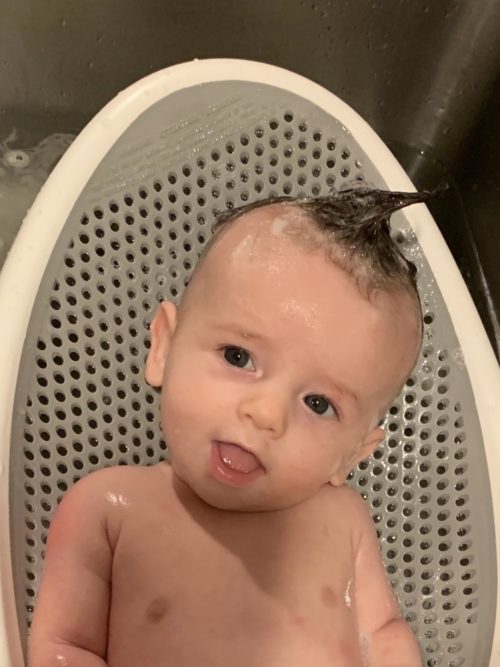 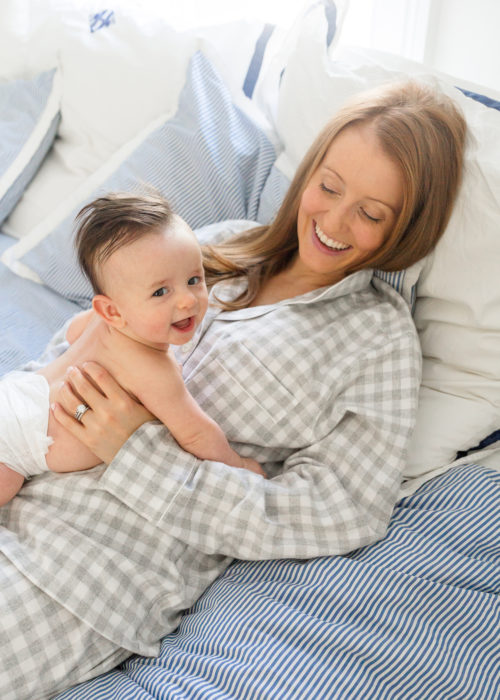 His sleep routine took a major hit this month which is apparently pretty normal around the 3.5-4 month mark. He went from sleeping 7-8 consecutive hours to waking up and screaming nearly every hour, but he’s slowly giving us longer stretches again. Our ideal schedule still looks like the one I outlined in this post, but that pretty much went out the window these past couple weeks. I downloaded the Taking Cara Babies e-book per many of your suggestions, but sleep training while sick with the flu sounded like a recipe for disaster so we haven’t really delved into that just yet. He’s not rolling from his back to his stomach yet so we’re still swaddling him in these sleepsacks most nights. We have the Baby Merlin’s Magic Sleepsuit but it feels a little roomy on him (he has way more mobility in it and constantly wakes himself up?) so I just ordered this transition sleepsack that my friend Jen swore by with her second baby. I’m thinking that dropping the swaddle is in our near future and a little nervous that will be a tough transition so hopefully I’ll have positive developments on that front to share next month. 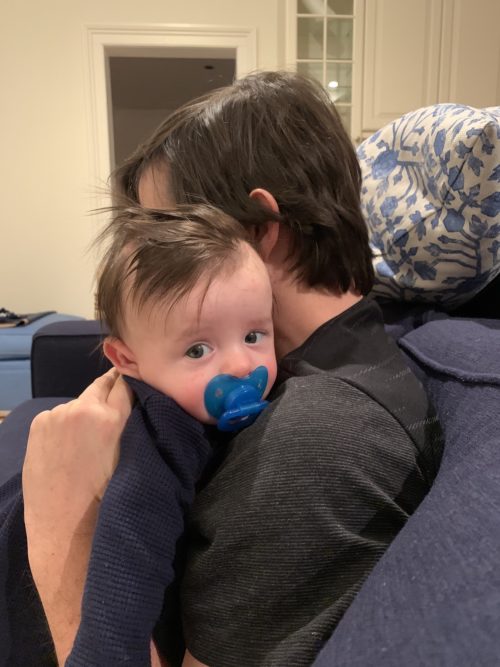 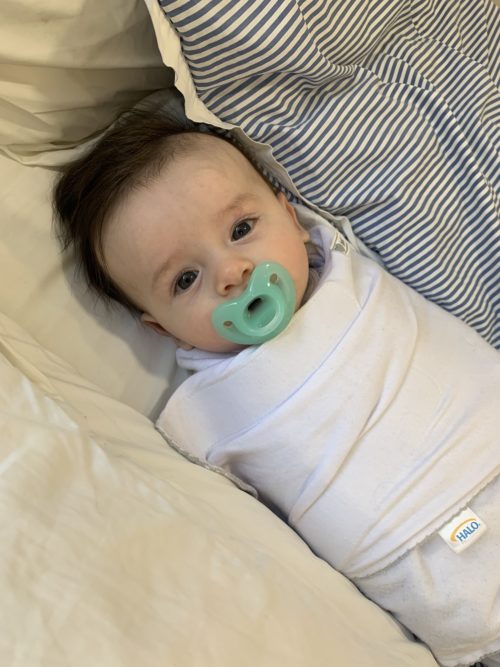 I’m continuing to exclusively breastfeed and did a lot of pumping while I was sick so I could maintain my supply and Will could give him a bottle of fresh or frozen milk at every feed. Pumping six times a day was so not fun and I was so happy to return to our regular feeding routine snuggled up in the glider in his nursery once I started to feel healthy again. We don’t have any plans to introduce solids just yet (to be honest we’re gearing up to start our kitchen renovation in the next few weeks and it’s all a little daunting!) but we go to the pediatrician this week so we’ll see what she recommends for him. If you have a little one, I’d love to hear what worked best for you! 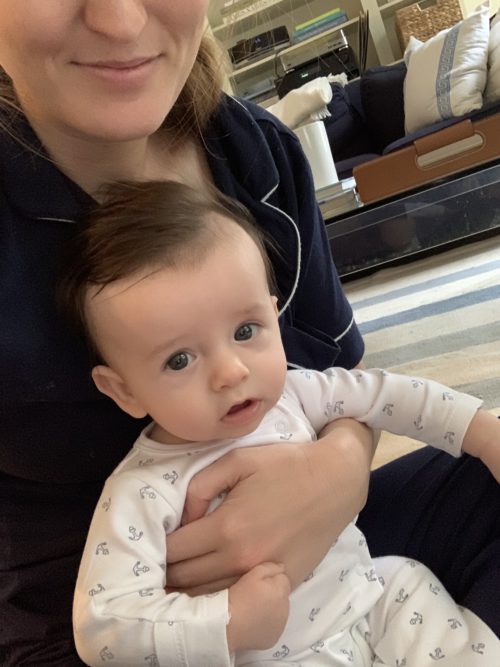 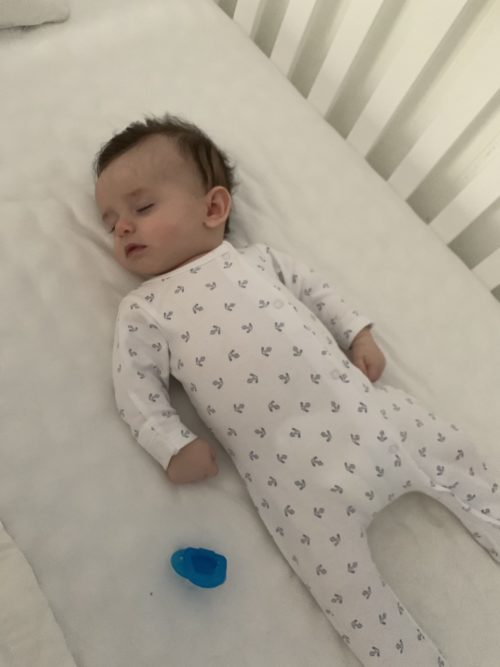 We’ve had a couple truly gorgeous days in Connecticut where we took Teddy to the beach or the park and it got me so excited for the warmer months ahead. I daydream about his first trip to Nantucket all the time and we were definitely going a little stir-crazy while we had the flu so I’m very ready for more sunshine and more daytime adventures in our future! 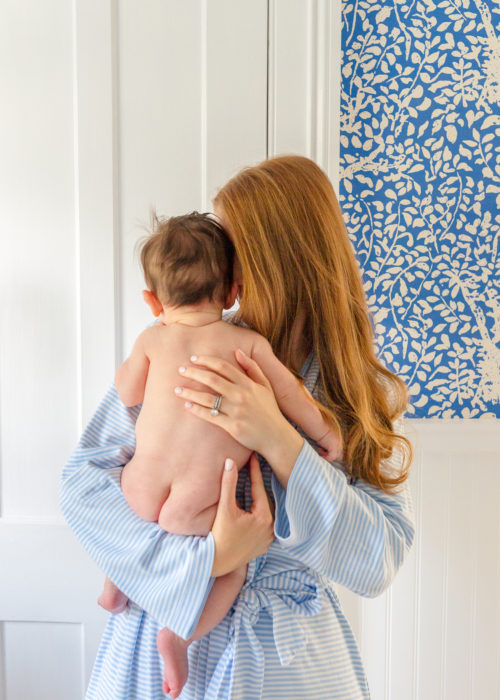 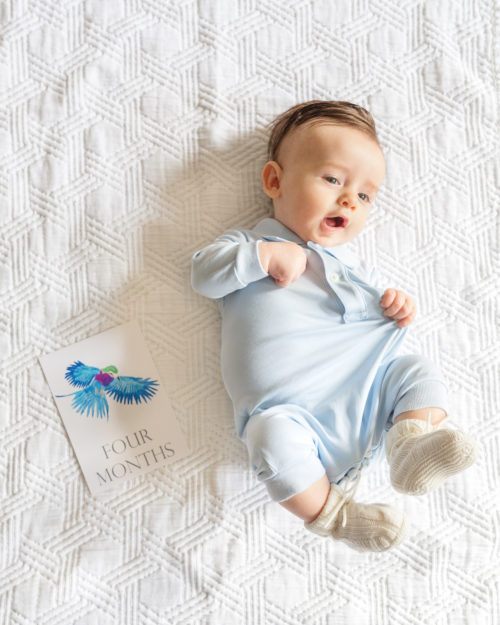 14 thoughts on “FOUR MONTHS WITH TEDDY”